With shipment Delivery method will be selected by customer and approved by manager. for $0
Sales price $78
Price / kg:
Description

Modernization is an important part of our company mission and, therefore, we have completely revised the design and functionality of the laser tag bomb. The new version of laser tag bomb:
- stands against cheaters,
- is equipped with a seven-segment indicator
- is packaged in an impact-resistant case.

Let’s tell about the advantages of this new laser tag bomb.

The new design of the device fits the overall style of additional LASERWAR equipment.
We have used contrasting colors to note important elements and not to distract the player with secondary details.
The device is made in a black plastic case. Thanks to the special lugs on the back cover, the bomb can be fixed to the wall. The weight of the laser tag game bomb is 1.1 lb (500 grams).

Inside it uses a 2.2 Ah lithium battery. "Crater" will work for 36 hours, and then it can be charged with any charger of Li + series. The power socket and the power-on lock are located on the side of the device.
On the front side, there is a red button, a seven-segment indicator, 4 IR emitters, and 1 IR receiver. The label is made in such a way that the picture can not be erased. The appearance of the "Crater" will withstand any gaming load. The final result looks good, and even the child will cope with the installation and cleansing of the Crater.

The functional is very simple. To switch on the bomb turn the key. Then press and hold the red button for 3 seconds and you’ll see "Fire" appearing on the display screen. At this moment the device requires confirmation that the player who plants the laser tag bomb is "alive". The player should shoot to the device, and this action will activate the countdown before the explosion. 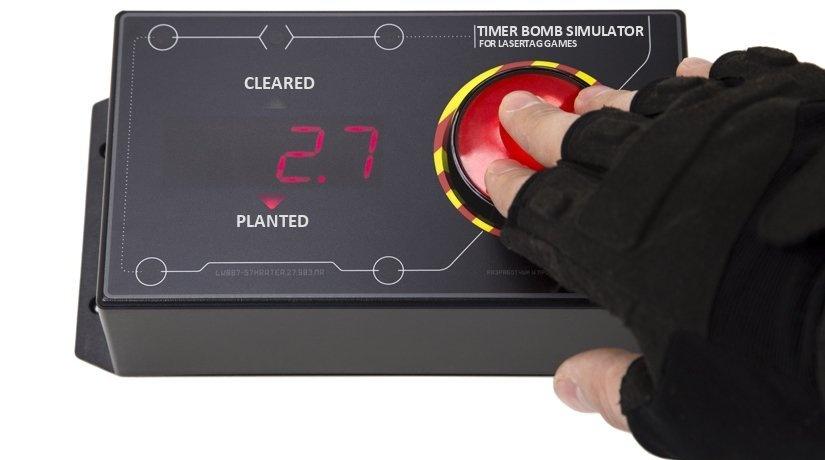 Mine clearance is carried out in a similar manner. The player should hold the button for 5 seconds, and confirm with a shot that he is not "killed". The bomb will be cleared. If the player is "killed" while deactivation process, then the countdown will continue. 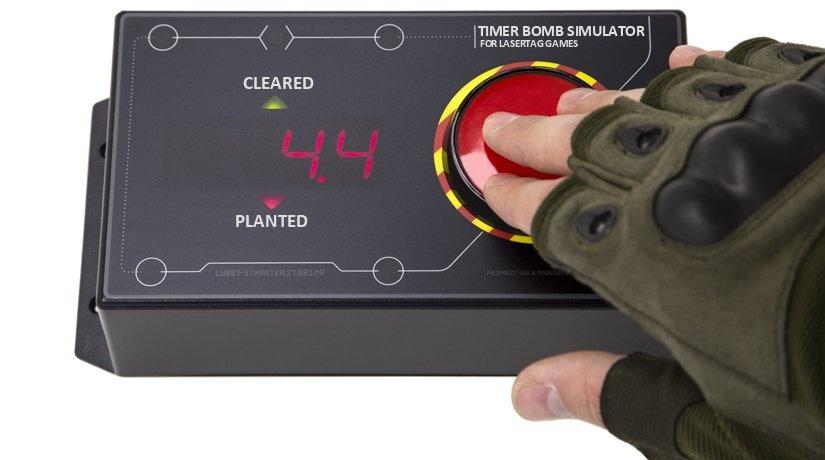 We wanted everything to be clear and honest in the bomb scenarios. The advantage of the laser tag is that all the game actions are processed by electronics. No controversies regarding who was hit first or whether the player was "alive" or not. This Laser tag bomb "Crater" is the device that fully complies with this principle.

To enter the configuration mode, just hold down the button and turn on the device. By pressing the button you can set the time before the explosion. The value can be set from 1 to 99 minutes. After selecting the time setting you should not confirm the selection because the device will automatically save the settings after 10 seconds.

You can start a new game using any LASERWAR remote control and «New game» command, or simply turn off and on the device. The time for planting and clearance of a bomb, the confirmation by a shot can be also set with Laser Tag configurator application.