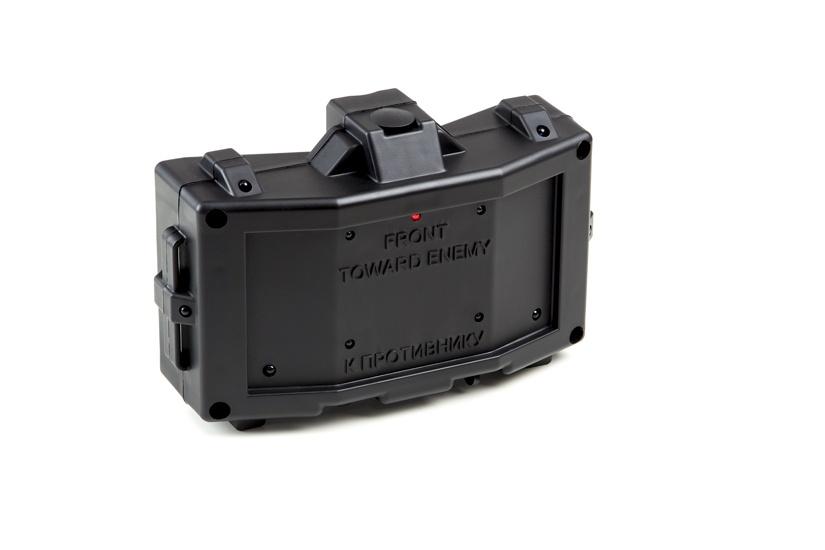 With shipment Delivery method will be selected by customer and approved by manager. for $0
Sales price $98
Price / kg:
Description

The new "Cerberus" Claymore mine will now take its place in the line of universal LASERWAR devices, replacing in its functions two devices at the same time: Motion sensor mine and old Claymore. 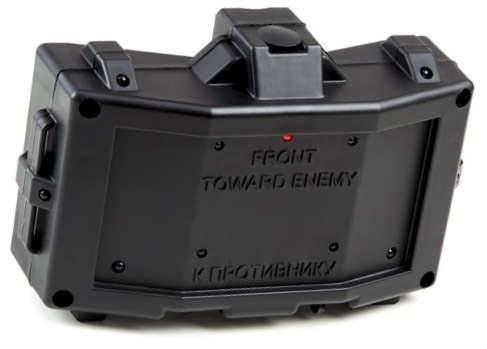 Not so long ago we announced the "Chameleon" Universal Point, which supports 4 types of emitting commands and may be used in 3 customizable scenarios. Now the arsenal of laser tag operators will have a new mine, which will greatly complicate the life of the enemy. Now capture the flag or hold a control point will be a more difficult task. In addition to the enemy bullet the laser tag player now can be killed by a new "Cerberus" mine. And it can hit both "the Allies" and "the Enemies" - everything will depend on the selected settings.

As a prototype for this device design, we took the US anti-personnel mine M18A1 called Claymore and the Russian MON-50 landmine. On the front side, this mine has 8 IR diodes, 2 IR-sensors, and 1 red LED-indicator. The back side of the case has several slits and two powerful 1 W speakers behind them. Such construction ensures maximum realistic sound during detonation. The lower part of the casing has a charging slot with a rubber stopper on the hood and the power button near it. On top there is a slot for installing the fuze, closed with a plug.

The black matte body will mask this mine, and impact-resistant plastic with compact dimensions and the absence of protruding parts reduces to the likelihood of fracture or cracks on the case during operation. On the back side of the body, this mine has protruding ribs with holes for metal pins. Two eyelets are located on the sides of the body and designed for pass a tape with Velcro textile fasteners for fixing this device on a tree or pole. This set of mountings allows arranging this mine anywhere. In the winter season, "Cerberus" can simply be put on the snow. Nothing happens.

LASERWAR engineers managed to create their own know-how regarding movement detection. In the new devices generation, we used common IR sensors but managed to realize the reflective principle in the small dimensions of this device case, while using low power consumption. This solution was made special for this landmine. Unlike cheap Chinese security ultrasonic sensors that, which are triggered by any sounds and slight movement, IR sensors in out device filter out any interference and provide 99.8% of stable operation. Thus, the percentage of random triggers in our technology tends to zero. Moreover using Chinese ultrasonic sensors needs significantly filtering increasing, which greatly reduces the motion detection distance, which is very critical for such device. We are also not using PIR-sensors that react to heat, although they have the highest sensitivity (up to 10-15 meters) because using such sensors would lead to equipment the mine with cumbersome protruding lenses of hemispheres dorm and contrasting white color. The mine would not have a military appearance.

That’s why our know-how movement detection technology has no analogs from other equipment producers.
The weight of this laser tag mine is 1.28 lb (580 g) and the size is 8.3 x 5.9 x 3.1 in (21 x 15 x 8 cm). The mine is equipped with a lithium battery with 2.2 Ah capacity. Its full charge will provide up to 36 hours of trouble-free operation of Cerberus. 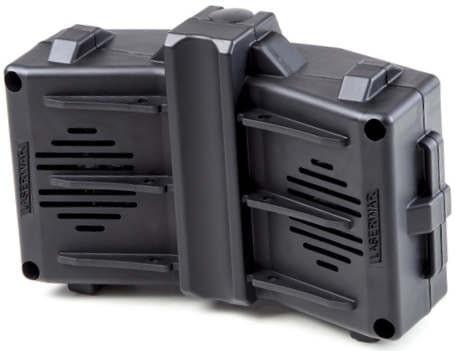 Immediately after switching on the mine makes a sound, that indicates the level of the battery charge. Then it starts a 5-second countdown. This countdown is accompanied by beeps and front panel LED flashes. When the countdown is completed, the mine becomes fully armed.
It explodes in 3 cases.
- if the IR motion sensors were activated at a range of 10 feet (3 meters).
- is if another mine or grenade explodes nearby.
- cerberus detonates if it is hit by the shot. Initially, it has 100 strength hit points. The number of shots is determined by weapon damage. When hit points fall below zero, the mine will explode.
The damage range is up to 12 meters.
After the triggering, the device periodically beeps for 10 minutes reminding about itself, and the red LED on the front panel flashes. After 10 minutes, it turns off. 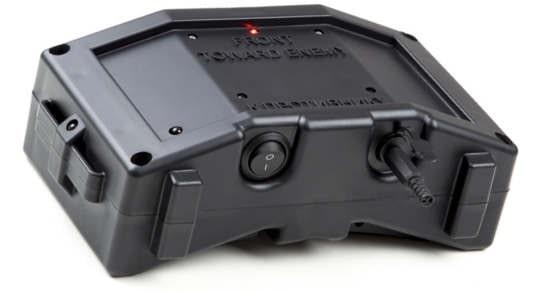 The configuration process is very simple. You will not need laser tag configurator, because everything is done manually on the playing field. Insert a special plug-key (it is included in the package) into the charging slot, and turn on the power button.
When entering this mode, the mine will say: "Admin mode", and the red LED will flash frequently. Settings are made using the Nano remote control: where a small button selects the and a large one changes its value. By the way, you can use any other laser tag remote control device. In this case, the "admin kill" command will select a parameter, and selection inside a parameter will be made with "new game" command. After all the parameters are set, you need to wait for 5 seconds. The mine will save the settings and make a short beep.
To exit the admin mode, you need to turn off the power and turn on it again.

Settings:
Sounds
- Minimum sounds. Quiet sounds do not unmask when installing mines and save battery power.
- All. Voice messages. Attractiveness for usual players.

Damage types
- Explosion. Killing all nearby players regardless of threat team color. Individual player's statistics will indicate the death from the explosion.
- Shot. The mine produces a series of shots with the maximum damage. The shot uses team color and ID of the player who armed this mine. This means that a mine explosion can be harmless to the members of the player’s team. The owner of Cerberus also improves its individual statistics. Killed players will also have an indication in his statistics that he was killed by the player who armed the mine.

Modes
- Classical. Mine is activated immediately after the power is turned on.
- Advanced. After each explosion, you need to reactivate the mine from the remote control with the "New Game" command. That’s why you can activate a mine only once a game or if you have admin remote device with new game command. This excludes the possibility of cheating and reactivation of the mine by simply rebooting it. So, the rule is: one activation - one explosion. In extended mode, the mine remembers the player's ID that has shot it before arming. Thus, after each explosion, the player will automatically improves his statistics.

Motion Sensor mode
- Switched off. Saves battery power. Eliminates false activation.
- Switched on. Allows you not to install a real tripwire. It saves time to arm a mine.
In addition to the above parameters, you can set the color of the team and player ID in the admin mode. To do this, simply shoot the IR sensor on the front side. In this case, the color and ID of the mine will be equal the color and ID of the player who shot it. You can also set the color of the team from the "Nano Remote" Universal Remote or Remote pro Devices.