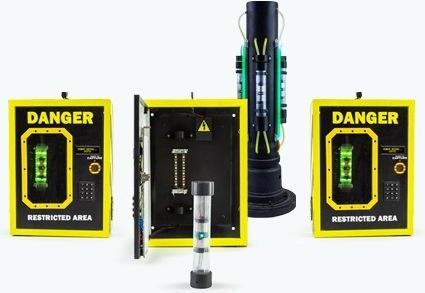 With shipment Delivery method will be selected by customer and approved by manager. for $0
Sales price $905
Price / kg:
Description

We systematically add new scenario gaming devices to our product line. Continuing the line of “Pandora's Box”, we’ve made a new device, that makes a new interesting set while combining it with the “Pandora's Box”.

The initial task of the players was the extraction of "radioactive" flasks from the Pandora's Box that was locked with a digital lock. To open the lock, the team should hold the box under control for a specified time by shooting it every 2 minutes and in the same time not allowing to shoot it by enemy players.

The “radioactive” flask, extracted from the storage, emits pulses of “radiation” with the crackling sound of a Geiger sensor.

With this new game set, the game scenario gets a sequel.

The players should deliver dangerous cargo to a specified point but being close to a flask takes away 10 health point every 30 seconds. Having collecting three flasks in one place the player can launch the “Activator” device that can have its own role in the game scenario. For example, the flasks can be a source of energy for an atomic engine or an explosive device, or, conversely, the “Activator” can neutralize the dangerous radioactive or biological containers. The main idea of the game scenario will depend only on your imagination. A good script writer will be able to build an exciting game using these devices.
After installing the flask in the "Activator" socket, it stops emitting "radiation" impulses, but only if it was installed correctly. If the radiation has not stopped, it is necessary to turn the flask upside down. Three properly installed flasks mean that the "Activator" is running.

Working of "Activator" is accompanied by sound and light effects. After that, the scenario is considered completed.
And of course, the price for the whole set is less than the sum of its elements.