The Command Post is a device that combines several devices: Domination point, MedKit, an Anomaly, and each of these devices has additional features.

If the usual MedKit can only renew any player's hitpoints and ammo, the Command Post if used as a MedKit can be configured to renew only the players color team. It also can be destroyed by the opposite team after the preset number of hits and can self recover after destruction in preset time, it can be set to a limited number of renewals and has many other options and settings.

In addition, the command post itself is a box in which you can carry other devices.

All these features make this device simply indispensable in complex scenario games, in tournaments and in cases when your players play out the same scenarios every day.

In this case, this device is indispensable in increasing the diversity of playable scenarios. 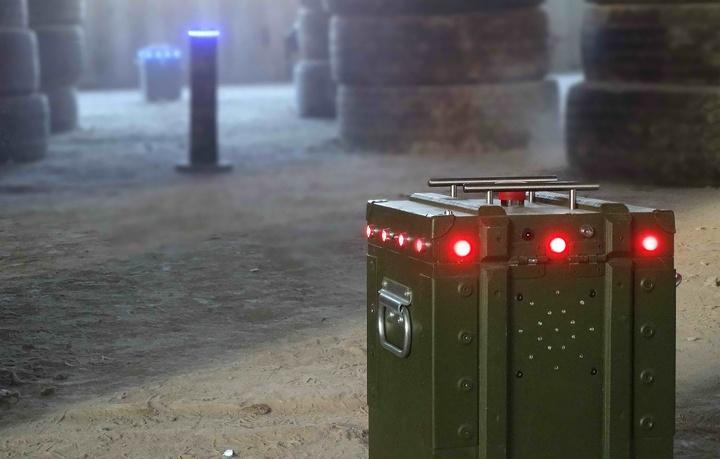 The activation of this device is accompanied with "Select game scenario" command.
There are three scenarios or types of using this device:

"Device scenario - Basic MedKit." Command Posts are usually located at the bases of the opposite teams and in this device scenario, the Command Post acts as a MedKit device, ie, it respawns “dead” players completely restoring their life, hitpoints and ammo. To respawn players, simply click on the red button and the Command Post will restart all the players in a radius of 5 feet (1.5 meters). If you hold down the red button until a single beep, then auto mode will be activated. In auto mode, the Command Post will respawn players with a certain time interval. The time between the signals is set with the Configurator. To change the scenario, you should switch off and then switch on your Command Post.

"Device scenario - Capture of the base" – is virtually the same as the Domination point scenario that uses Command posts instead of Domination point devices. But there are some tangible differences that make the game with the Command post much more interesting than with simple Domination Points.
- Firstly, you can shoot a photosensor with a distance of 1 - 3 meters to capture the Command Post.
- Secondly, the game master can configure the number of hits that the "Command Post" needs for its capture using the Laser Tag Configurator software. The game master can also set the option that if the player did not manage to capture the Command Post, then after a certain period of time, the number of shots required to capture it, will increase by 1 until it reaches some preset value. After capturing the Command Post as a Domination point, it lights up with the color of the capturing team, and alarms with the sound, "Command Post captured".
- Third, in "Capture the Base device scenario", the Command post as an option can be set for periodically emitting “radiation” around it so it will be impossible for the player to stick around it. The frequency and power of such “radiation” can be also configured with the configurator software.
The Command Post also can be set to some round time. After activating “Capture of the base” device scenario, its round time can be changed by pressing the red button. This will be accompanied with lights flashing:

But, unlike the Domination Point round, the countdown time with the Command post begins immediately after the sound signal, "Command post is activated". After the preset time, the LEDs of the Command post will light up with the color of the winning team.

"Confrontation device scenario". This scenario ideally requires two Command post devices: one for each team. These devices will become the bases of the opposite teams. In this scenario, the Command post renews life and ammunition only to its color team. The number of such renewals is limited and is preset with the Configurator. The Command post can be attacked by an opposite team, in this case the capacity of renewals and ammunition will decrease until players will hear the signal, "Base was attacked and destroyed". After that, the LEDs will light in a neutral color, and the Command post goes into self-healing mode (This time is also set from the configurator). If desired, this option can be disabled.

The Command post in this scenario does not heal hit players, it only revives the “dead”.