Smart Kit - is a device that can perform a variety of functions. It can operate as a Medkit device, as a respawn, as a cartridge store, like the anomaly zone, or as the device that turns players into zombies or changes their team color. It is an easily programmable device that brings complexity and surprises into gameplay.

After turning on, the device should beep, the diodes should make a test and the scale status bar of the Smart Kit should fill up and turn off.

The device automatically switches to the mode in which it worked before turning off ("Medic" mode by default).

Setting the game mode parameters is made with the Laser Tag Configurator application. But you can also make some common settings without special software directly on the game area.

1. To enter the device in programming mode, run the program and switch to your language, 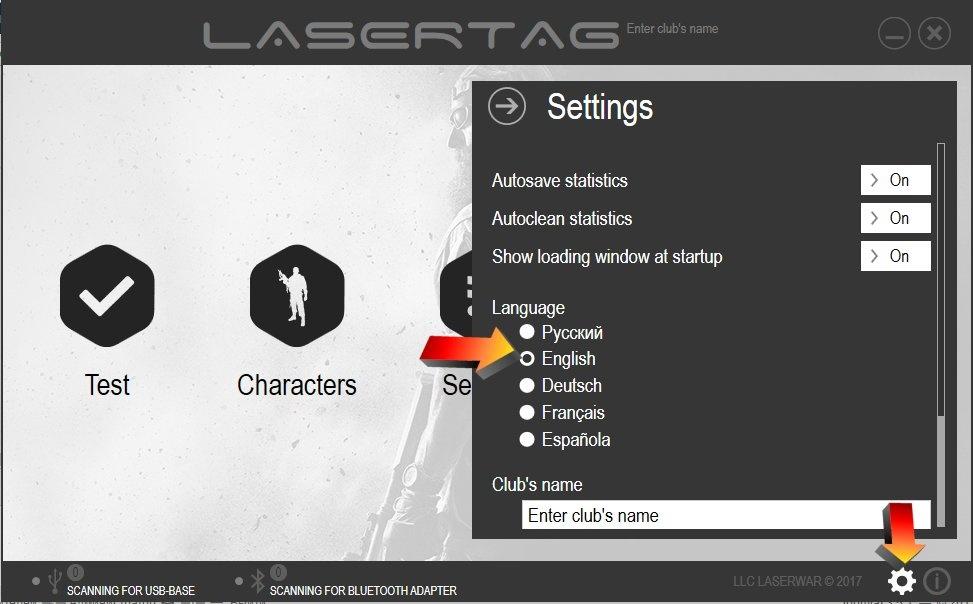 open the "Smart Kit 2.0" in the "Devices" section and connect your USB-Base to your computer. 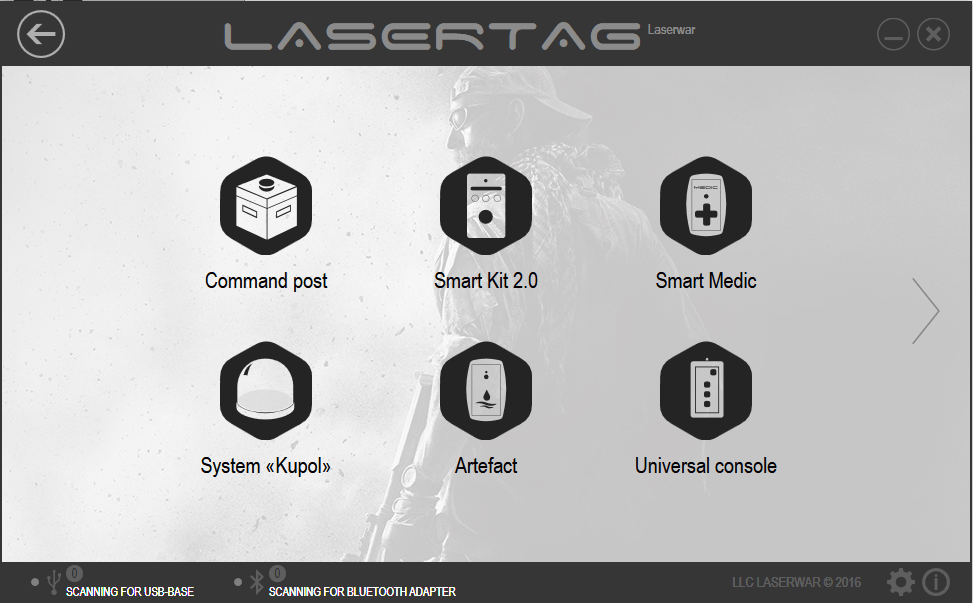 2. Place your USB-base so that the sensors are in front of the Smart Kit's status bar at a distance of no more than 3 feet (one meter).

3. Turn on the Smart Kit. Within 5 - 10 seconds, the unit will enter the programming mode and the Laser Tag Configurator displays the type of connected device and its current firmware version.

If "Smart Kit" was initially turned on, just apply the "New Game" command from a Remote control or Remote Pro and place the USB-base as described above.

The following options are available for setting: 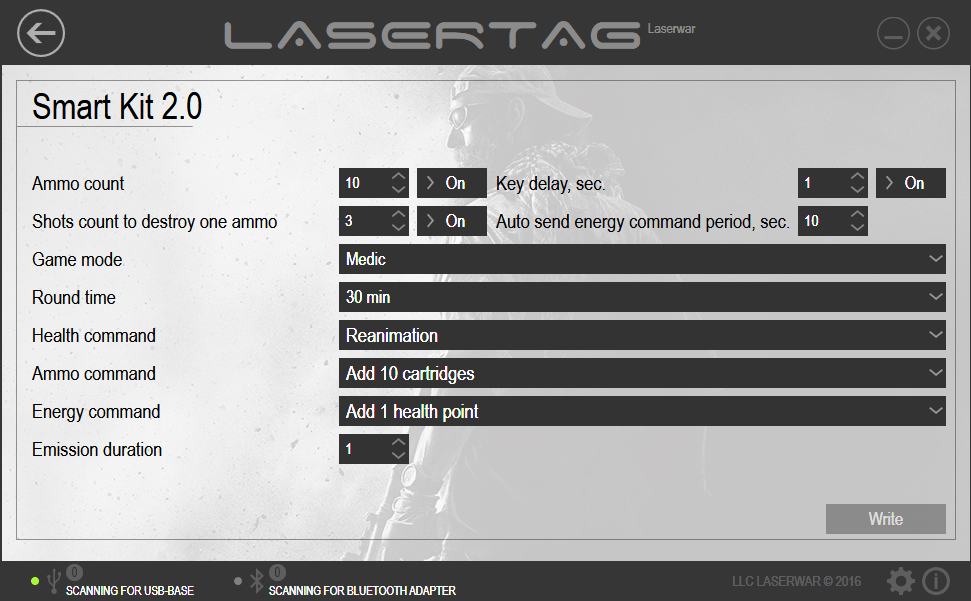 "Ammo count" means the number of packages that Smart Kit will have, that is, how many times it can send some preset command without a reboot, or how many times it can be used by players. This parameter is set in the range from 1 to 250. When Smart Kit works in "Medic" or "Ammunition" modes, its scale is initially filled, indicating that it has the maximum number of packages.

This scale will start to empty after taking the packages.

After a set number of packages ends, the player will see the purple light diode on the top of the Kit and the red diodes on the edges of the scale.

The next use of the device will be possible only after applying the "new game" command from the remote. This option can also be disabled. If it is disabled, players will have an unlimited number of packages.

"Shot counts to destroy one ammo" means the number of hits to destroy one package, that is how much you need to make shots to this Smart Kit in order to reduce the specified number of packages on 1 unit. Shooting should be made to the diode, located in the upper part of the body. 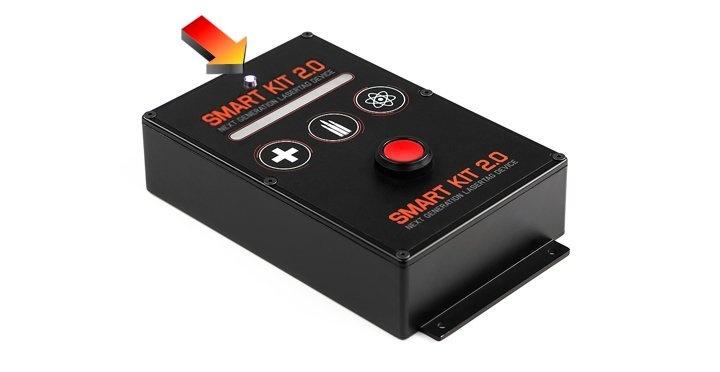 If a player hits it, then it lights up with white and beeps. The scale that displays the number of packages begin to empty. The parameter of shots is set in the range from 1 to 250. It can also be disabled.

"Key delay, sec" or button hold time is the time during which you should hold the red button for activating the Smart Kit. This parameter is set in the range from 1 to 240 seconds. It can also be disabled, in this case, the kit will be triggered immediately when the button is pressed.

"Auto send energy command period, sec". This time indicates the frequency of activation of the device in "Energy" mode. It means that after the preset time, this Smart Kit will send the selected command. The parameter is set in the range from 1 to 1800 seconds.

"Round time" means a period of time from the beginning of the game during which the device will be active. At the end of the preset time, the programmed number of packages will be automatically reset to zero (even if it was infinite), and the use of the Smart Kit will be impossible. You’ll need to restart it ("New Game" command from the remote control).

"Game Mode". After exiting from programming, the device automatically switches to the selected game mode. Smart Kit has three Game modes: Medic, Ammo and Energy, all with their own commands.

Changing settings on a game field without the Laser Tag configuration.

You can also make some settings without USB Base. But without this device, you can change only the type of game mode and packages limits.

1. To activate the mode selection menu, the game master should hold down the red button and instantaneously send the "New Game" command from a remote control device. The device will go into programming mode.

2. Game mode changing is made by pressing a red button and is accompanied by the changing of the diodes’ color depending on the selected mode ("Medic" - green; "Ammo" - yellow; "Energy" – red).

3. Selection of the game mode is confirmed by holding the button for 2 - 3 seconds.

4. After confirming game mode you'll hear a short beep, notifying about proceeding to the selection of packages number. You can select between two options:
Limited number of packages (the number of Smart Kit activations will depend on the preset number, by default - 10 packages). If you select a limited number of packages, you'll see red extreme diodes lighting on the device scale, unlimited package. In this case, the diodes on the scale will constantly change its color (green – yellow- red).

5. Hold the red button for 2 - 3 seconds to confirm your choice. After that, you'll hear 3 short beeps. It means that the device has been restarted and is ready to work.

Also, if the Smart Kit is hit in "Medic" mode then it will light up with the color of the shooting team. In this case, the device will execute the commands only for the players of this team. Recapturing the device is impossible.

In "Energy" mode, (regardless of the number of selected packages), the scale will start to fill gradually. After reaching the maximum, it beeps, notifying that the device was activated. The status bar (the scale) will be reset and filling will start from the beginning. Clicking on the button during the filling of the status bar will have no effect. All parameters like scale filling time, the type of generated command, and the number of packages can be preset using the Laser Tag Configurator. By default,t the number of packages is - 10; scale filling period - 10 seconds; command - "anomaly."