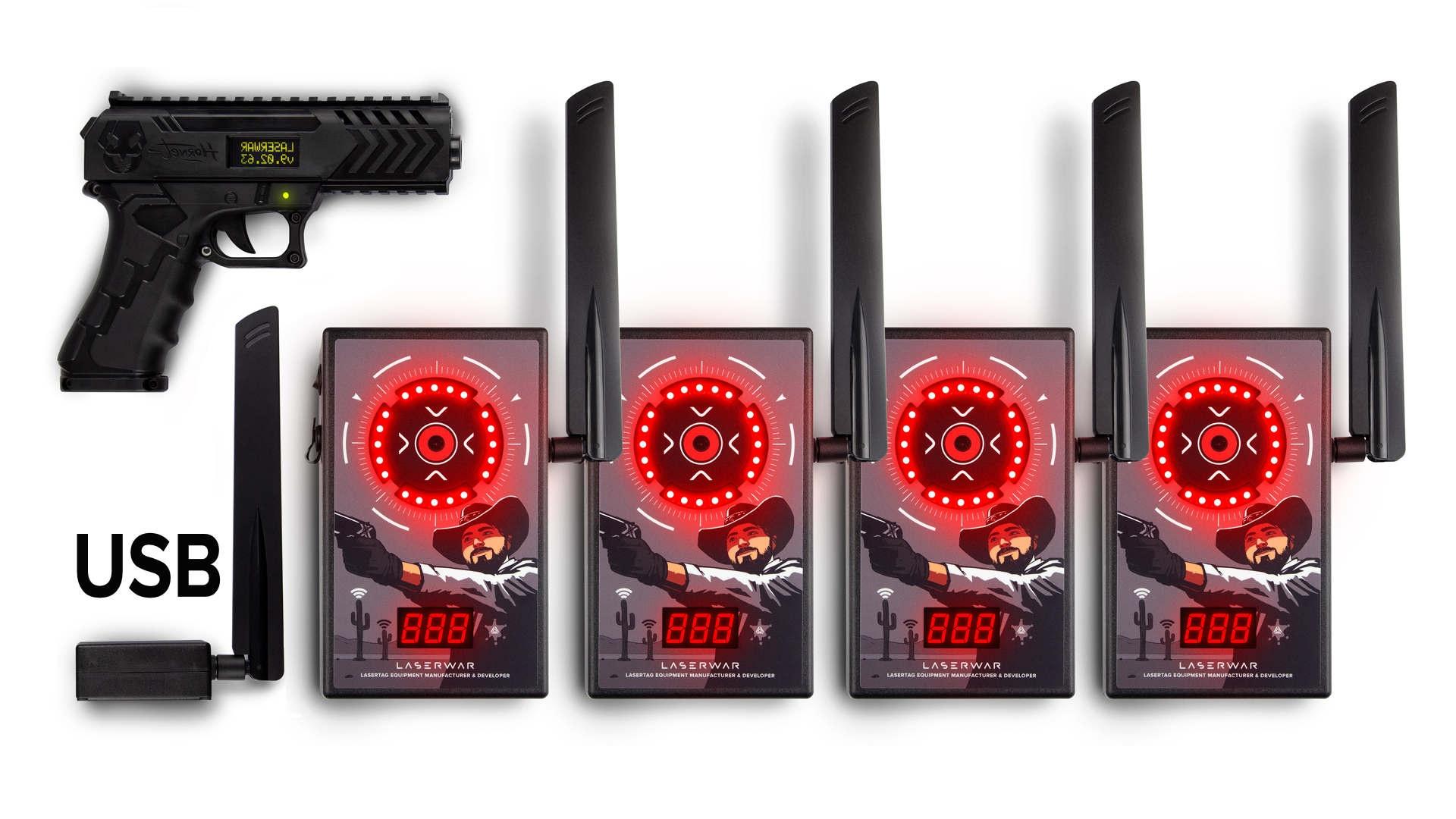 With shipment Delivery method will be selected by customer and approved by manager. for $0
Sales price $1,198
Price / kg:
Description
Wild West interactive laser tag shooting gallery is an attraction equipment package consisting of:

Since the price of the shooting gallery equipment package starts at $1198, with $5 per player price this business will return its investments in 120 games if two players participate in each game.

Managing and scoring software supports using from 2 to whopping 250 targets simultaneously. The number of targets in this laser tag shooting gallery can be increased or decreased upon your request.

The shooting gallery is fully compatible with any Laserwar guns, however, we recommend using it with a Hornet pistol, or with any taggers with sniper-precision parallax optics, since its beam diameter is much narrower, which is more suitable for the shooting gallery specifics.

The shooting gallery software is supplied free of charge with any set of equipment and allows operator to control targets, start and stop games, and calculate players’ points

The shooter must hit the target for as long as it glows with their color.

The shooter must hit all active targets in minimal time. After all targets are hit, the round restarts.

The player's score is the average percentage of reaction time in milliseconds. 100 ms is taken as 100%

The targets are distributed in half between two shooters. The goal of each of the shooters is to hit the enemy target, in which case it gets recolored in their color. The goal of each shooter is to recolor all the opponent's targets in their own color.

If all targets are colored with the same color, the new round ensues.

If all the opponent's targets are recolored in the player's color, they get 1 score. The goal of the player is to score the maximum number of such win rounds.

Targets are randomly distributed in half by color between two shooters. The goal of each shooter is to recolor the opponent’s targets in their own color.

To recolor the opponent’s target in their color, the shooter must hit it 10 times (since each target initially has 10 health points), but after each hit, all targets are randomly swapped while keeping their respective color and health points left.

The shooter can also restore health points of their targets by shooting them, 1 hit increases target health points by 1. However, if a shooter hits their own target that has full health points, this immediately takes 5 points away from that target’s health.

If the shooter manages to recolor all rival’s targets in their color, they get 1 score, and the round starts again.

The player with the most win rounds (most scores) wins the game.

The shooter must hit a currently active target. The targets get active one after another in a random sequence, that is, once the target goes off, one of its neighbors gets activated.

The sequence and order of which target gets active as well as duration of this status is random.

The current Difficulty Level is displayed on each target

The player's goal is to get to the maximum Difficulty Level by the end of the round.

This scenario is similar to the Arcade Shooting scenario. The goal of the shooter is to hit the target that lights up with the shooter's color. However, the rest of the targets are lit with three other different colors that change every second.