With shipment Delivery method will be selected by customer and approved by manager. for $0
Sales price $110
Price / kg:
Description

"Chameleon" Universal point is one of the new generation devices in the product line of LASERWAR company. The development of this device lasted more than six months and the design and functionality of the device were completely revised. Now it has 3 scenarios in one device and can be configured within several seconds directly on the game area. Universal point supports 4 types of pulses: "radiation" (takes health hitpoints from players), "healing" (restores health completely as a medkit), reammunitioning (rearming magazines) and an anomaly (game managers can select any of the lists of more than 20 commands in laser tag configurator software). 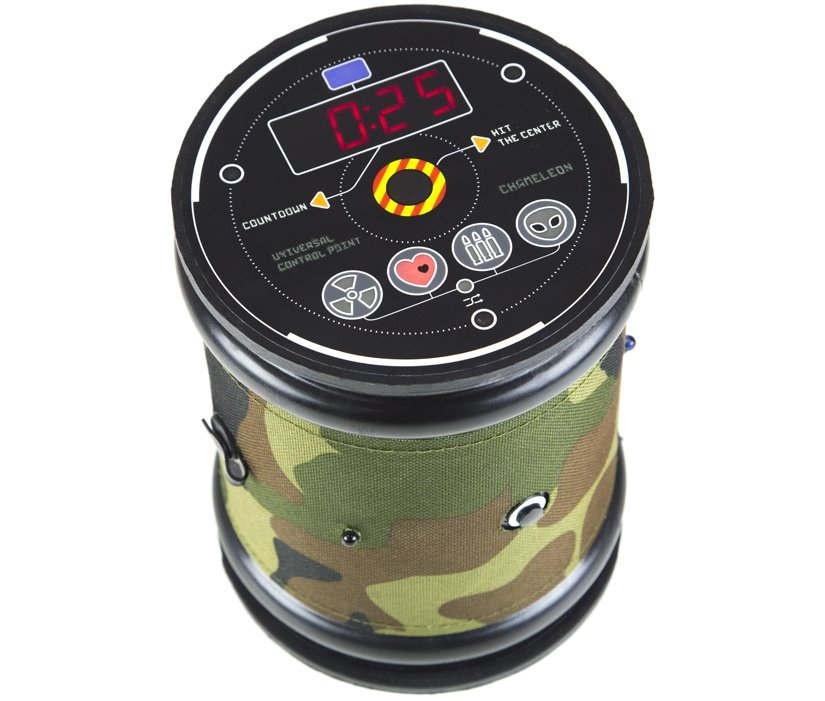 LASERWAR company designers managed to combine the visibility and originality in the appearance of this device. The cylindrical shape body of "Chameleon" universal point is made of black impact-resistant plastic. On the upper base it has a digital board with "Ammunition", "Health", "Radiation" and "Anomaly" icons with three IR emitters and one IR sensor. Significant elements are framed. It also has a field for the color of the team and a bright central zone for indicating the IR sensor position. The body is equipped with an anti-vandal lock, control button and a charging socket that has a rubber stopper on the hood. The weight of the device is 22 oz (620 g), which is almost 2 times less than in the previous version. The power source is a 2.2 Ah lithium battery that provides up to 36 hours of operation. The new Universal point can be charged with any Li + chargers including Firefly. A powerful piezo-sound emitter provides an excellent sound signal.

The cylindrical body of the "Chameleon" is wrapped with a dark-colored Multicam fabric. The cover is fixed with velcro fasteners, and it can be easily removed for washing or dry cleaning.

Unlike the previous version, the new universal point has a real variety of functions. To switch on the universal point just turn the key, you’ll hear the sound signal. The digital display will tell you the numerical order of activated scenario. To start this device use "New Game" command from any LASERWAR remote control device (universal remote, remote pro, remote nano etc.) The device will start the scenario that was set in the settings.

1 Scenario.
As soon as the game has started, the digital display starts the countdown. When there are 3 seconds left before the action, the device makes several beeps. And then the device starts emitting IR pulse with preset command. The instructor can also set the random selection of the emitted command pulse. In such case, the player will be able to know what exactly will be emitted only 3 seconds before it emits IR pulse.

2 Scenario.
The universal point is used as a base and belongs to one of the teams, it has its own health hitpoints and can be destroyed by the enemy team.
As soon as the game begins, the Universal point starts the countdown and the team's icon on the Point is colored with the team color. After the preset period of time, it emits healing pulse. When an enemy team player shoots at the device, he damages it and takes away the number of hitpoints, equal to the damage settings of his gun. In this case, the Universal point stops emitting healing pulse, and the remaining hitpoints are displayed on the indicator. After a certain time, health hitpoints begins to recover, and, having recovered completely, the device again begins emitting healing pulses. If the enemy shots take away all the hitpoints of the Universal point, the base is considered to be fully destroyed and is not restored again.

3. Scenario
The universal point is used as a Domination point or control point and initially has a neutral color. After the player's shot, the point is considered to be captured by the player's team and signals this by coloring the team's icon in the appropriate color. After some preset delay after the shot, this point releases а "radiation" command and begins to heal the players of the captured team. If the team owns the point for a certain time, the game stops and the Universal point shows the color of the winning team. See Domination game scenario for more info.

To configure the Universal point start it in Administrator mode. To do this turn on the device while holding the control button. All settings are set using this control button. The players can select between 3 types of acting scenarios, each of scenario is configured by several settings. The basic principle is simple: the settings are switched in a loop inside the acting scenario. Switching over to the next setting inside the acting scenario is possible after holding the control button for more than 3 seconds. When paused for 5 seconds, the device switches to editing the next acting scenario. When paused 10 seconds, the settings will be saved into the device’s memory and the Universal point will notify the player with a short beep.

The following settings are available in each scenario:

1st Scenario ("С__1"):
"CodE": type of pulse (radiation, healing, reammunitioning and anomaly). An icon of the corresponding type of the pulse is highlighted.
"dt": with a countdown indicator: pulse period.
"n": the number of issued pulses.

"Chameleon" Universal point can be configured with the lasertag configurator application.