Laser Tag Headband
With shipment Delivery method will be selected by customer and approved by manager. for $0
Sales price $138
Price / kg:
Description

The LASERWAR Company is pleased to introduce the unique Smart RGB-headband. This headband is a result of long and hard work of our developers. Engineers and testers have spent more than a year making the final version of this product. Now we can say with great confidence that this new headband will have a strong impact on gameplay and achieve dreams of many laser tag players. How does this device differ from previous headband versions?

All changes are based on three fundamental points:

1. The term «Smart» in the name of this product is used because it is really a smart RGB-headband. This unique device will allow you to get a new angle on laser tag.

Multizone means the division of the headband into several sectors. Each hit sensor is equipped with a vibration motor. When the player is hit by another player, he will feel vibration only from those hit sensors that have detected the infrared pulse. Last year, some players were complaining that they сouldn’t understand what direction they were under fire. In such case, a well camouflaged sniper could destroy the whole group of opponents by itself unobserved. With the help of these smart headbands, players can now detect the direction of the shots and find out where is the best place to hide so they don’t become an easy target. So now snipers should weigh all the "pros" and "cons" before opening fire because now their location can be easily detected.

Turning on the power is made with the tact switch, which should be held for 1 second. It is convenient and usable. In older versions of laser tag systems, the crafty players had the ability to turn off the power of the headband for a while and be bulletproof for several seconds. With our new "Anti-cheat" system, this trick will never work. When the player turns on the device the second time it beeps, then the headband glows purple, and then the fire function of the laser tag gun is automatically switched off. There is no place for cheaters in laser tag game battlefields. In addition, the laser tag gun’s owners will appreciate the absence of random activations of headbands during transportation.

Up to this point, players used several methods and additional tools for distinguishing between the opposing teams: different colors tape on laser tag guns, color duct tape on dressing and other distinguishing details. Now, the need for such accessories is eliminated. This function has long been successfully used in arena laser tag systems and now this option is also available for outdoor tactical laser games. The headband can thus be set to glow throughout the whole game and start blinking brightly after the hit. This function is very useful in buildings and in dark labyrinths. So, it will be easy to distinguish players of the opposite teams for players and audience.

The background glow is activated with a special setting which has 15 degrees of brightness. Game masters can optimize this parameter depending on the conditions of gaming area.

This glowing will not be a decamouflage factor if it is switched off or set to minimum brightness. Or conversely, you can set this glow to maximum for playing in the night or in the dark arena to achieve a clear indication of the players on the game area.

Headband battery life is up to 48 hours. Lithium polymer battery with 1.8 Ah capacity can be recharged from any Li + series power charger made by LASERWAR Company (except "Spider" charger). In addition, players can use power adapters with a voltage of 5 - 9 volts. Headbands have a built-in power indicator, which indicates the need for kit recharging. If the battery is running out, the intelligent electronics will turn off the headband to protect it from deep discharge. 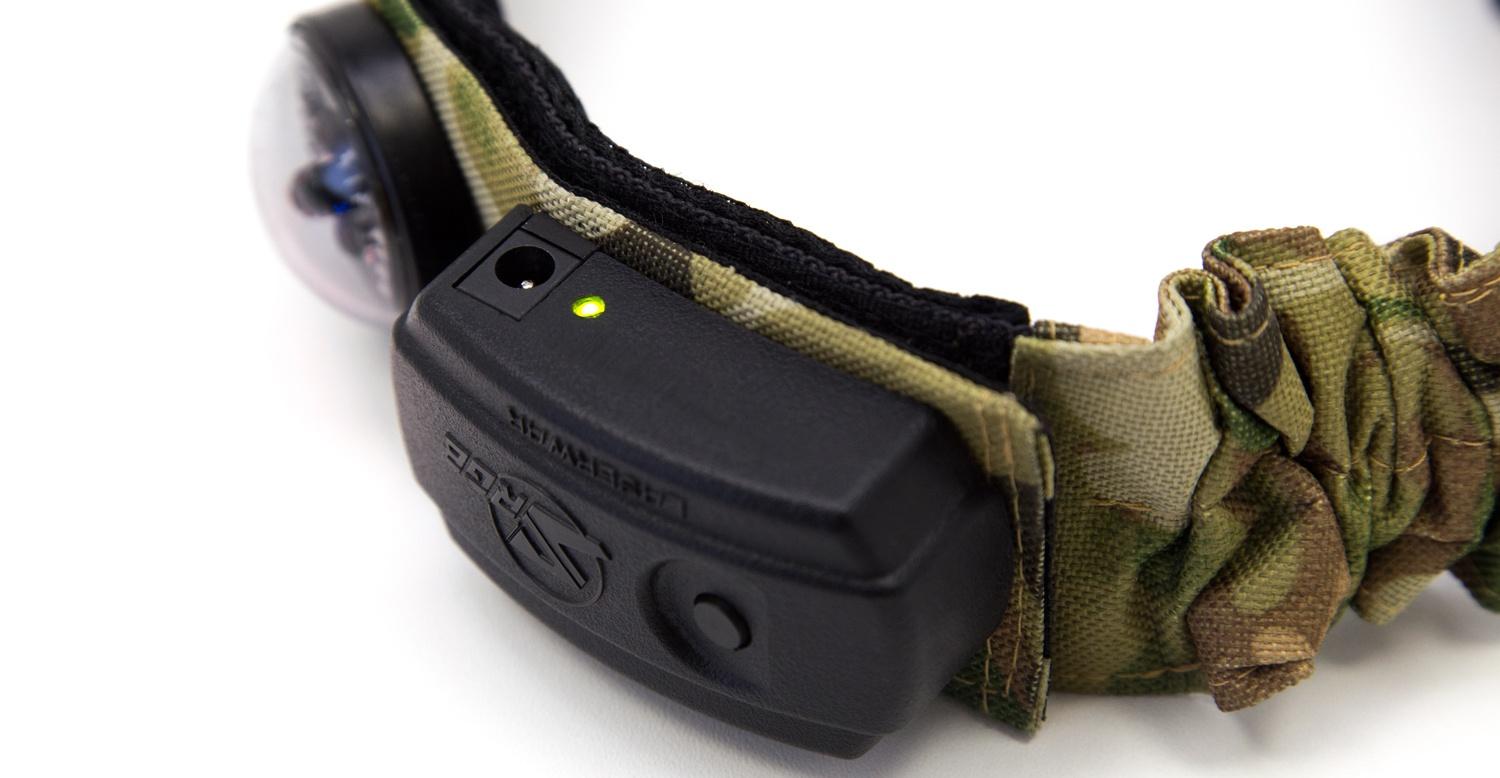 Careful attention was paid to the ergonomics of this device. Compared with the previous version of headbands, this device showed higher parameters of usability.

This laser tag headband is equipped with 4 hit sensors. We have spread the battery and control board to different cases. In this way, we have achieved a good weight distribution: that's why the headband fits a player’s head tightly. In addition, we have increased the reliability and range of the Bluetooth-connection. The form of cases for the control board and battery was designed especially for laser tag headbands. These cases are concave to fit the anatomy of the player's head.

Thanks to removable sweatbands, the same headband can be used by different players, even after very active games. The sweatband comprises two layers. The first layer is AirMesh, where the material consists of a grid of three-dimensional weaving that forms different-sized cells in the outer and inner layers. This construction provides a strong and continuous air circulation, makes damping and buffer effects. AirMesh is an ideal fabric for using in circumstances where it is necessary to reduce friction without strength loss.

The second layer is a polyethylene base that protects the outer part of the headband from moisture, keeping the electronics and other special fabric dry and clean.

This headband with great functionality and possibilities weighs only 7.8 oz. It can be comfortably used also by a child and an adult. Thanks to the sophisticated design, this device is head and shoulders above similar market offers.

We have automated the entire assembly process of this smart headband. Motherboards are assembled by robots, so the risk of marriage is minimal and human error factor is excluded.

Laser Tag devices developers spent more than a year in construction testing and revision of engineering prototypes, so the new headbands are advanced and tight-knit.

Superbright LEDs are visible throughout the whole shot distance. Each sensor is equipped with two photoreceptors, which excludes the presence of blind areas that are inaccessible for hit. The brightness of RBG-headbands is higher than in previous versions of this device.

Headband sensors are made of polycarbonate and therefore are not susceptible to mechanical damage. Electronic boards are protected by lacquer coating, which ensures reliable operation throughout all the operating process. A three-month field trial showed that headbands are not affected by rain and dampness.

In our game sets, we use multi-level player alert system. For example, if a player gets a virtual death, his headband will notify him by triple vibrating and then the alert will be duplicated by sound.

Headbands are available in 3 colors: standard (black), pixelated and MultiCam.