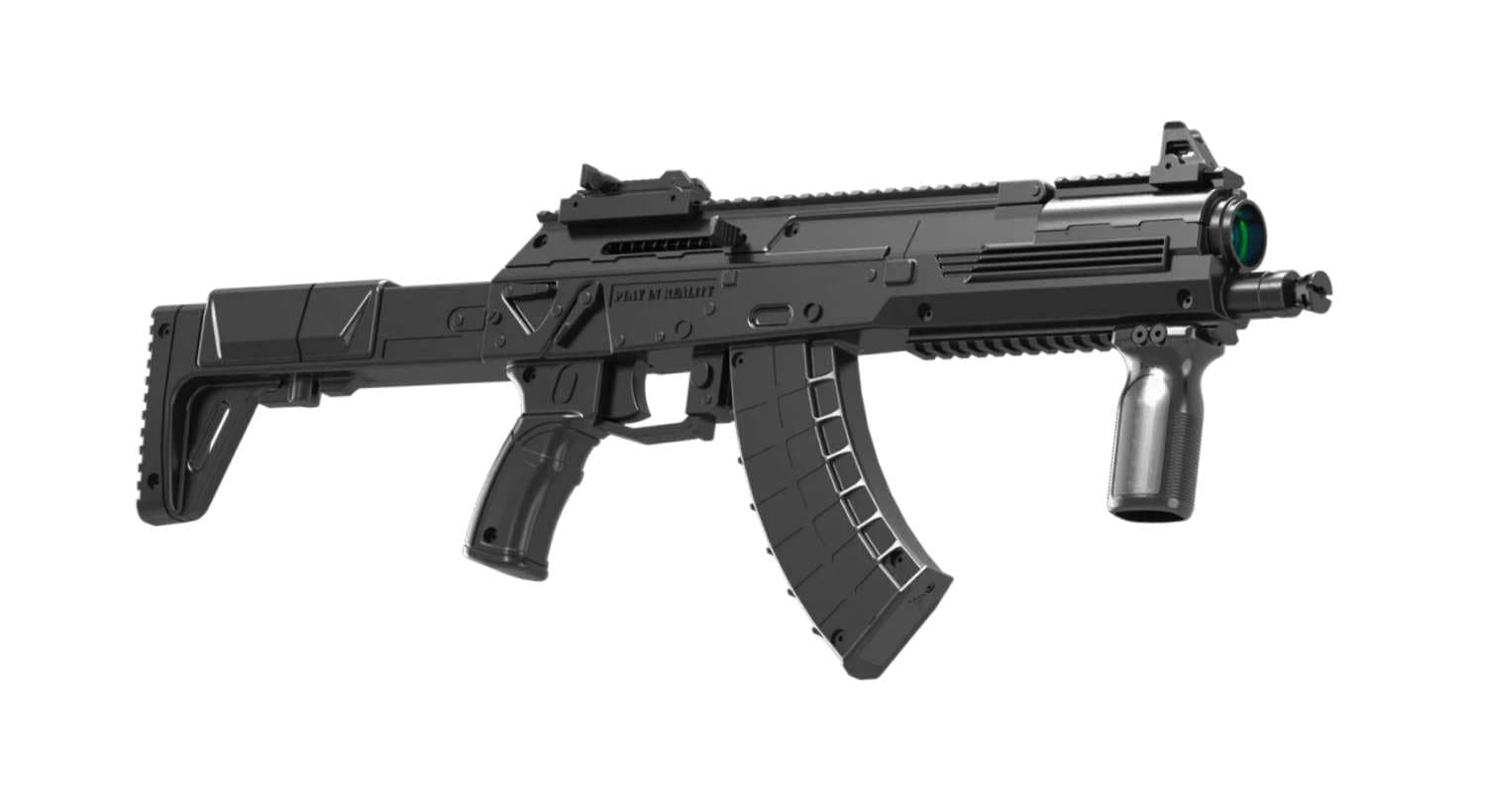 Here are its main differences of AM-22 from the classic AK12, which has been sold with over 20,000 copies and operates in laser tag business operators’ arsenals in more than 50 countries. 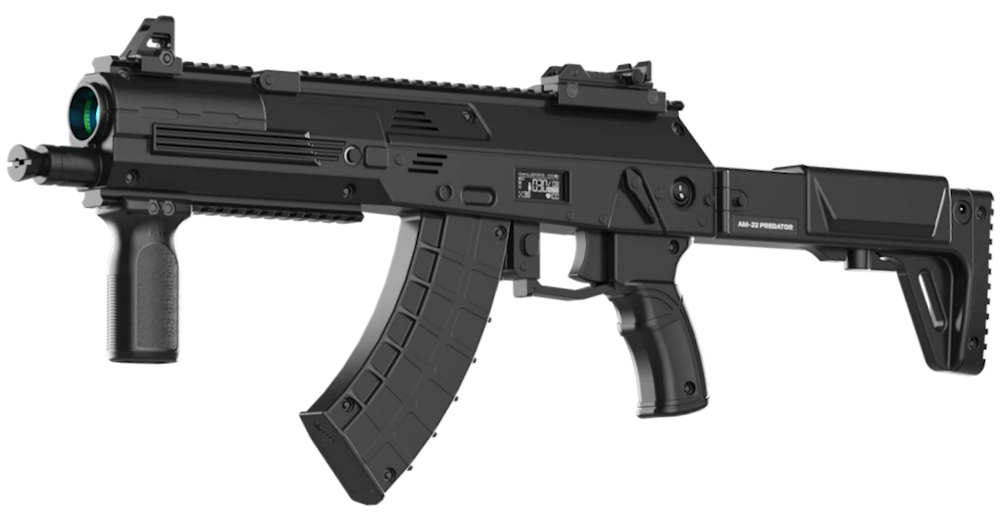 We made a reload with a charging handle that is also available in the AK15 assault rifle design (which differs in their front parts and Parallax optics). The reloading handle lever is made of softer plastic with an increased viscosity coefficient, which does not allow it to break even with sudden harsh movements. However, of course, we do not recommend pulling it with your whole strength and trying to break it. For those who believe that milliseconds of reloading outcomes in a laser tag battle, we also kept the old reloading button mechanism. It will be very convenient for sport laser tag players and for children. The button is dustproof and installed according to the IP67 standard. The player can use both reload options at the same time.

The AM-22 is equipped with a new magazine with a slightly different shape of a fully corrugated body which looks more akin to modern AK-series magazines. As before, part of the electronics is placed in these magazines in specifically provisioned places. In addition to the usual electronics for taggers, this magazine has a special acoustic socket that provides a loud sound even without acoustic holes, which additionally protects the electronics of the tagger from moisture and dirt.

This is one of the most interesting innovations of Laserwar. We have almost completely eliminated any possible breakdowns in the tagger trigger system. In this laser tag gun, we have abandoned the use of a microswitch, which, although a fairly reliable component, can still fail over time, especially as a result of operation in wet conditions.

Now we use non-contact trigger, which means it will not depend on weather conditions or components mechanical wearing. Now the trigger is made on the basis of a Hall effect sensor and a neodymium magnet.

Now the trigger can work for decades, simply because there is nothing to break. The same trigger system is used on our AK15.

Everything else is the same advantages that the time-honored AK12 has.

The same, decade-proven case, molded by weapons technology from high-viscosity impact-resistant amorphous polymer, which can withstand both strong impacts and extreme temperatures and adverse weather conditions. As we say in Laserwar, you'd rather lose it than break it. More crash tests can be found here.

As with AK12, this tagger can only have a built-in prism optic, which, according to many operators, is more suitable for rental conditions, since it has a wider beam, which makes it easier for beginners to aim and hit. At the same time, the hit range of at maximum power settings is up to 820 feet (250 meters). However, the beam is adjustable, that’s operator can use this system at minimum power settings when conducting sports laser tag tournaments.

The upper Picatinny rail is designed for mounting optical and collimator sights, while the tagger by default has a front sight and a rear sight. The lower rail is designed to install a tactical handle, which is already included in the basic option, as well as underbarrel grenade launchers, and tactical lights. 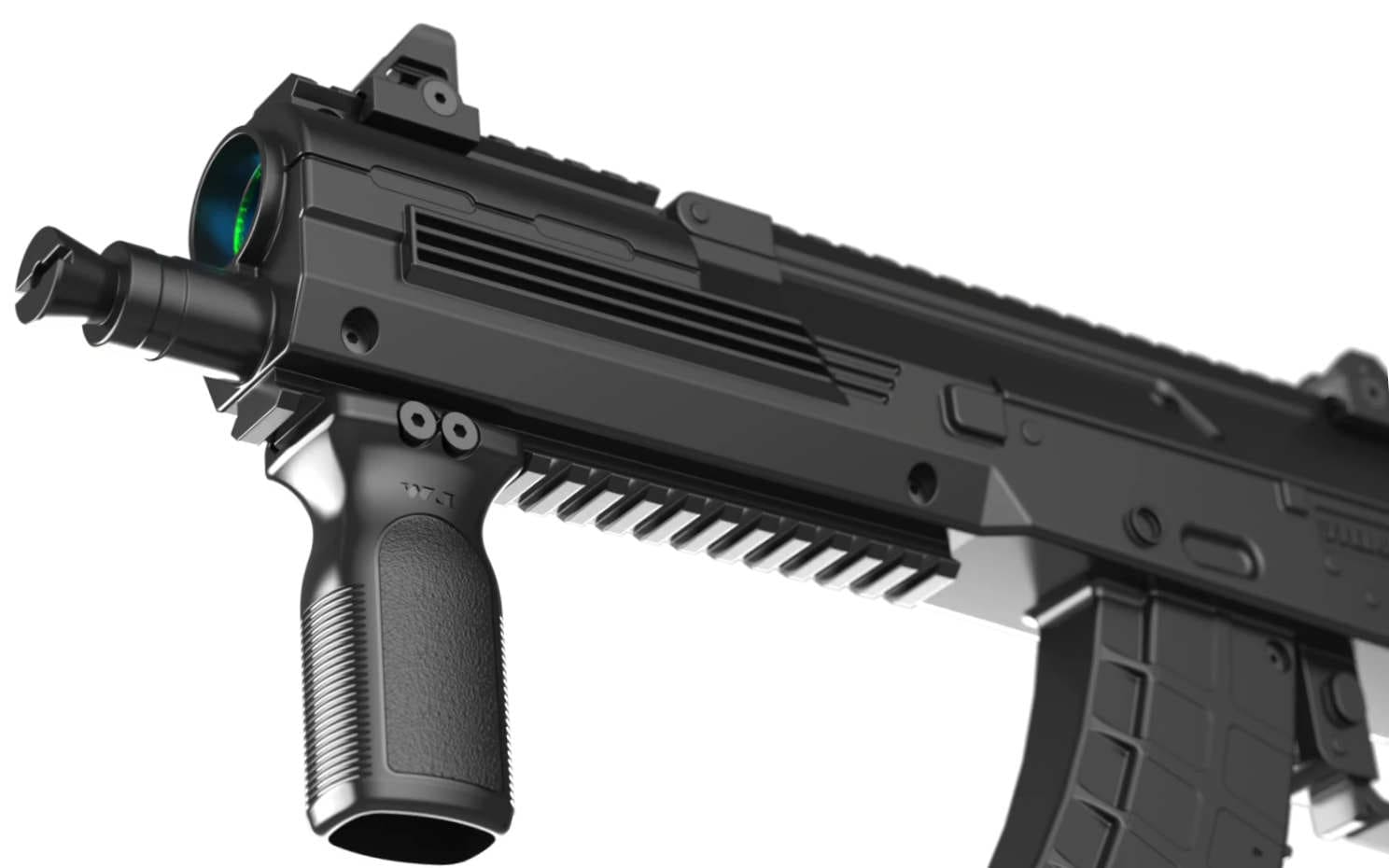 The tagger is equipped with a 2.2 amp-hour lithium-ion battery, which allows the owner to play up to 36 hours without further charge, depending on the use of online Wi-Fi score system and feedback simulation. However, optionally, the case can be equipped with either an extra battery, bringing the total operating time to 72 hours, or a weighting unit that increases the overall weight of the weapon.

As an option, this tagger can also be equipped with a special rubberized protective bumper, which is available in several colors and, on the one hand, makes the game safer, and on the other, allows the players to identify the color of the opposing team from afar.

Feedback and OLED options are also available for this laser tag gun.