Pulsar is a unique sci-fi blaster developed by LaserWar.

With shipment Delivery method will be selected by customer and approved by manager. for $0
Sales price $478
Price / kg:
Description

We are pleased to present you an extraordinary specialty - the Pulsar laser tag gun, which was developed by LaserWar in 2022.
Let's take a look at 18 selling points of this unique laser tag gun that will make it a hit in the laser tag industry.

1. New generation OLED display
The new generation OLED display features an unmatched matrix; its unique trait is adaptive contrast enhancement up to 10 times in bright light. In this model, we placed the display at the upper part of the case, strictly in the center with an inclination towards the player's head, so now the player can easily control the game settings without being distracted from the unveiling battle. 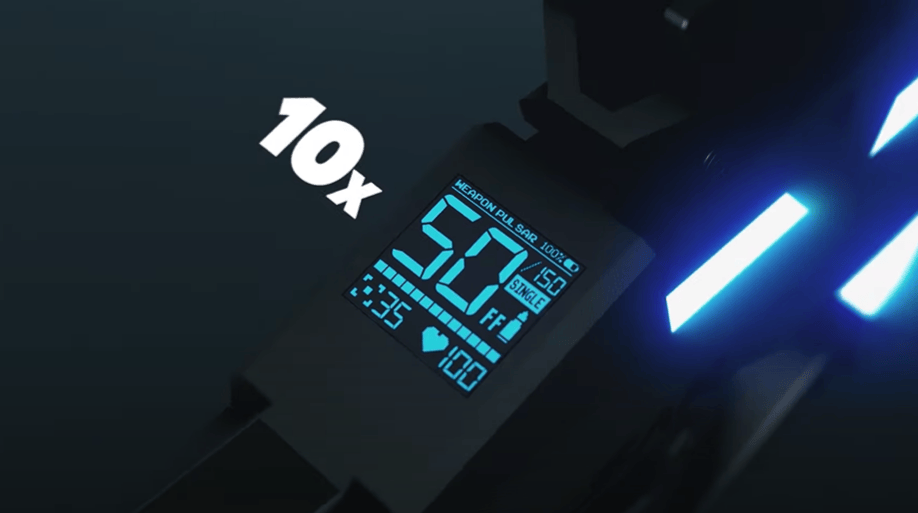 2. Appearance
The appearance of this tagger creates the feeling that you have a blaster from the future.
The manufacturing material has a great strength and plasticity, and due to its compactness and functionality, this tagger will be easy-to-handle for both children and adults. 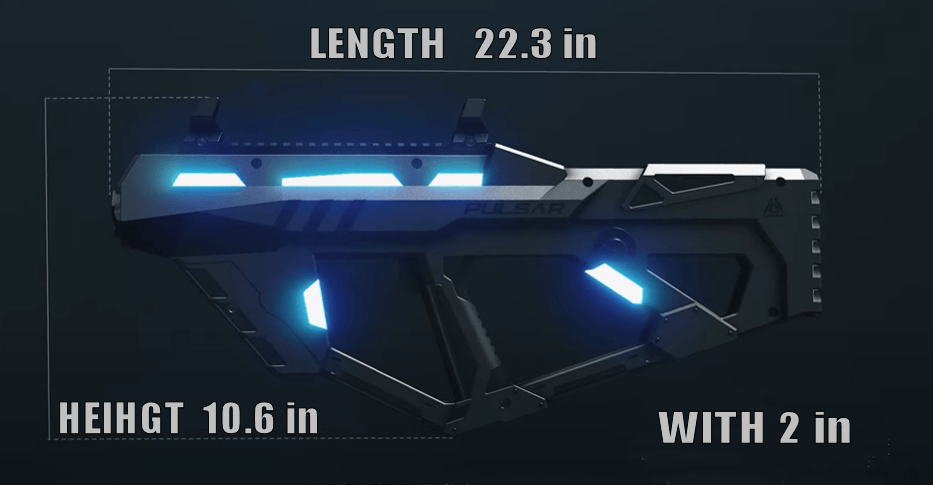 3. Front handle
The laser tag gun is equipped with a wide front handle that is comfortable to hold when playing close-in, so the player can use this laser tag gun even in small and compact arenas. 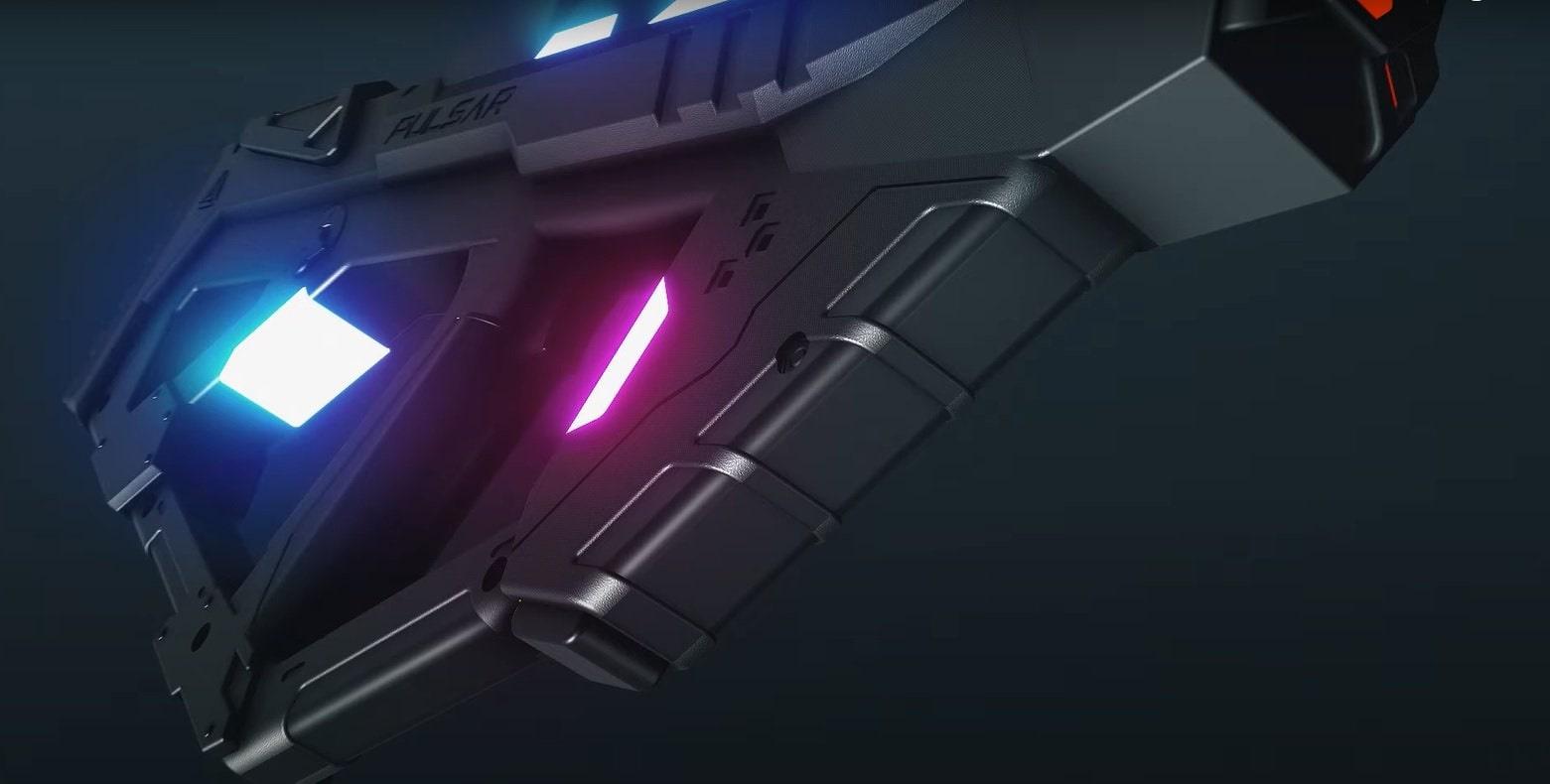 4. Front bumper
The Pulsar's bumper doesn't just ensure the players’ safety, but it is also a nice addition to the shotgun which adds to the predatory looks of the laser tag gun. And it can be made in different colors. 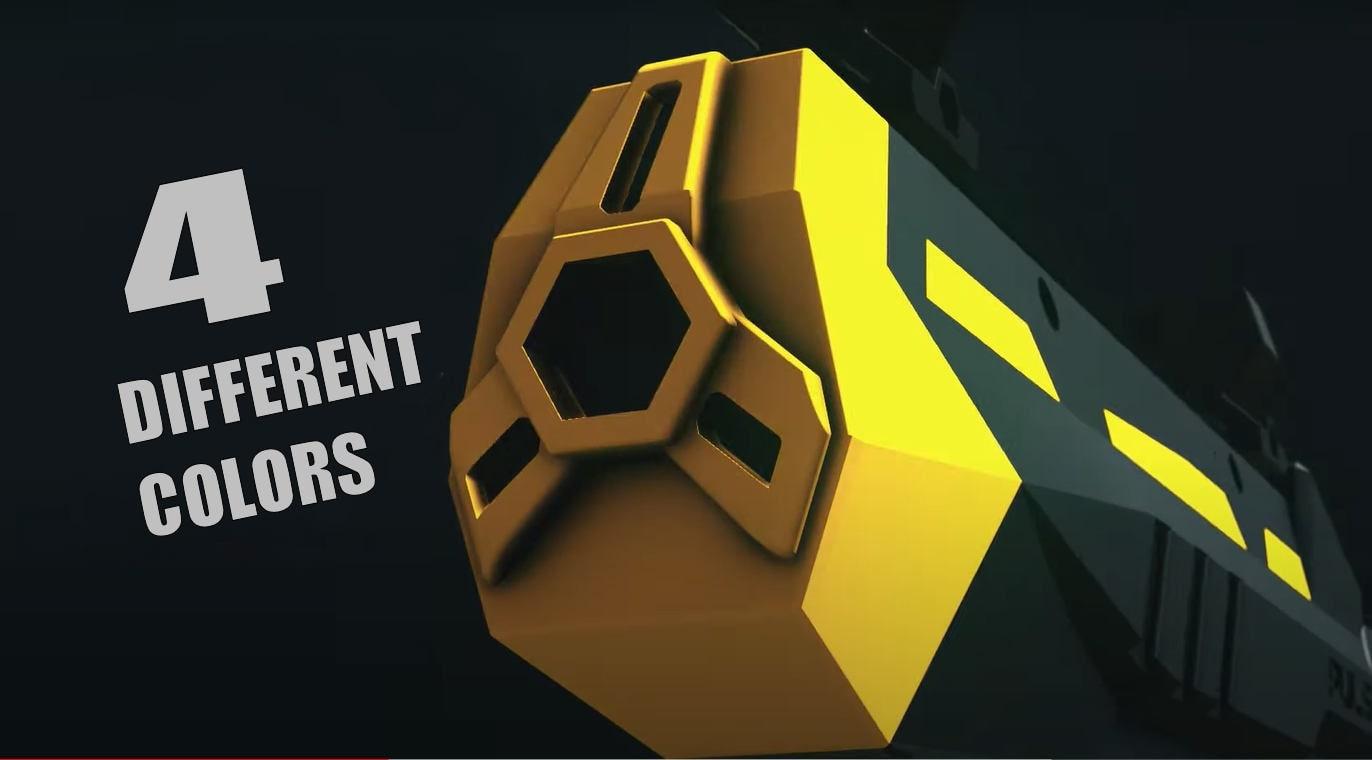 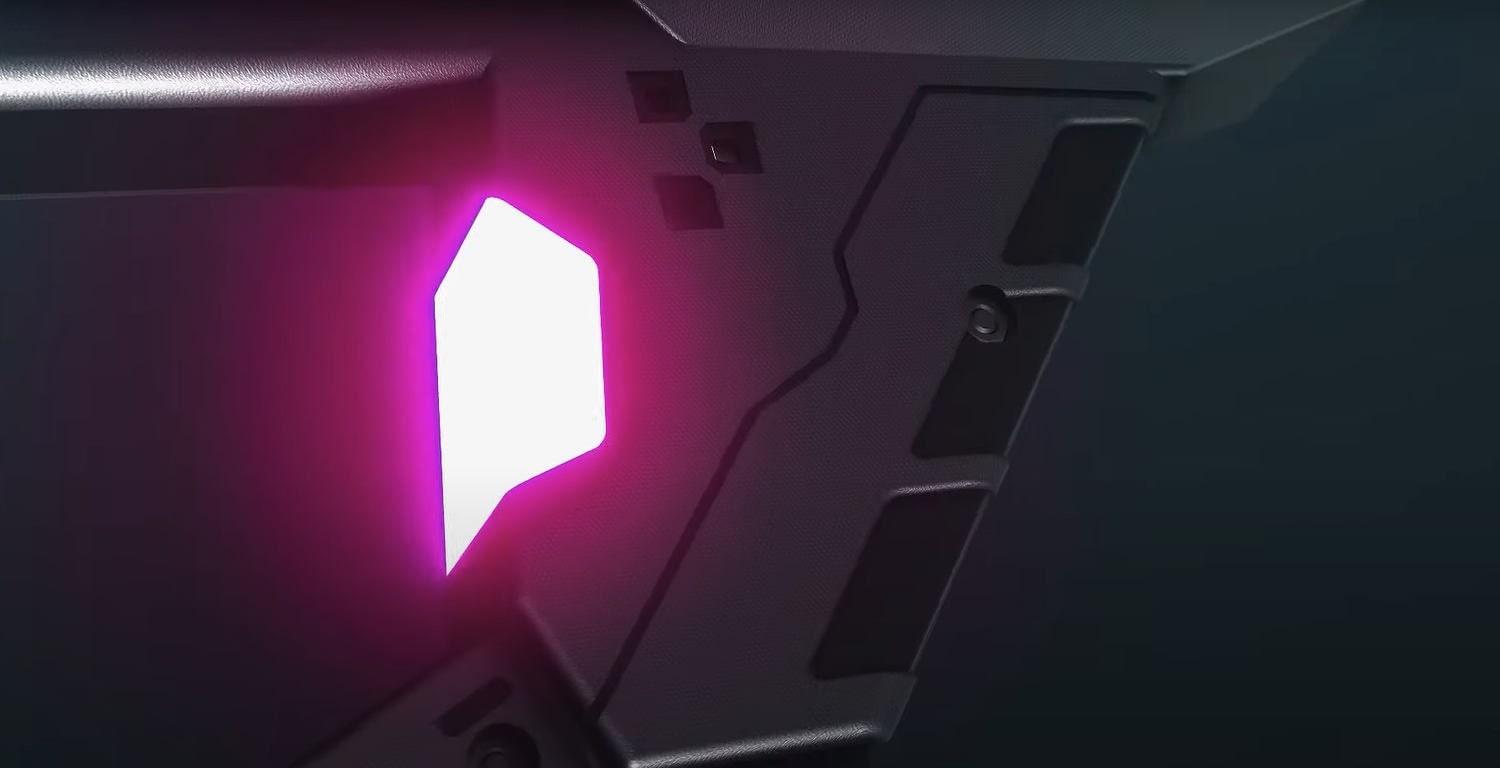 We have an option to install a high-capacity battery. To do this, the designers considered enough room for a 5.5Ah battery in the tagger body case.

7. Impulse feedback
We've included an option to integrate an impulse feedback that is twice as powerful than the options you might have seen among our competitors. 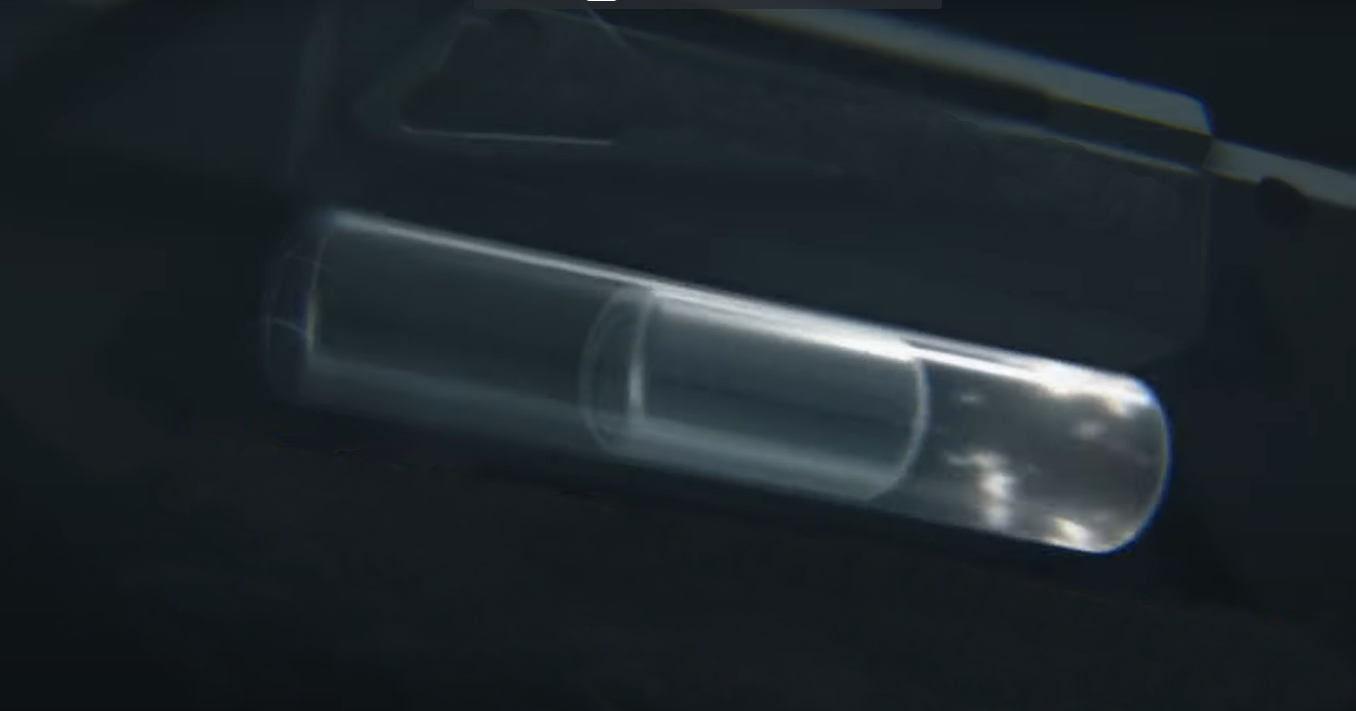 8. Classic feedback
Feedback technology makes a return in the basic Pulsar configuration. After many tests, in this version of the laser tag gun, we installed a vibration motor next to the optics, so that the feeling of the recoil became even stronger.

9. Prism and Parallax optics
When buying the equipment the operator can choose the type of optical system installed in the laser tag gun. As with most of our models, precise parallax 2.0 or a classic Prisma that is easier to play for new players are both available for Pulsar. 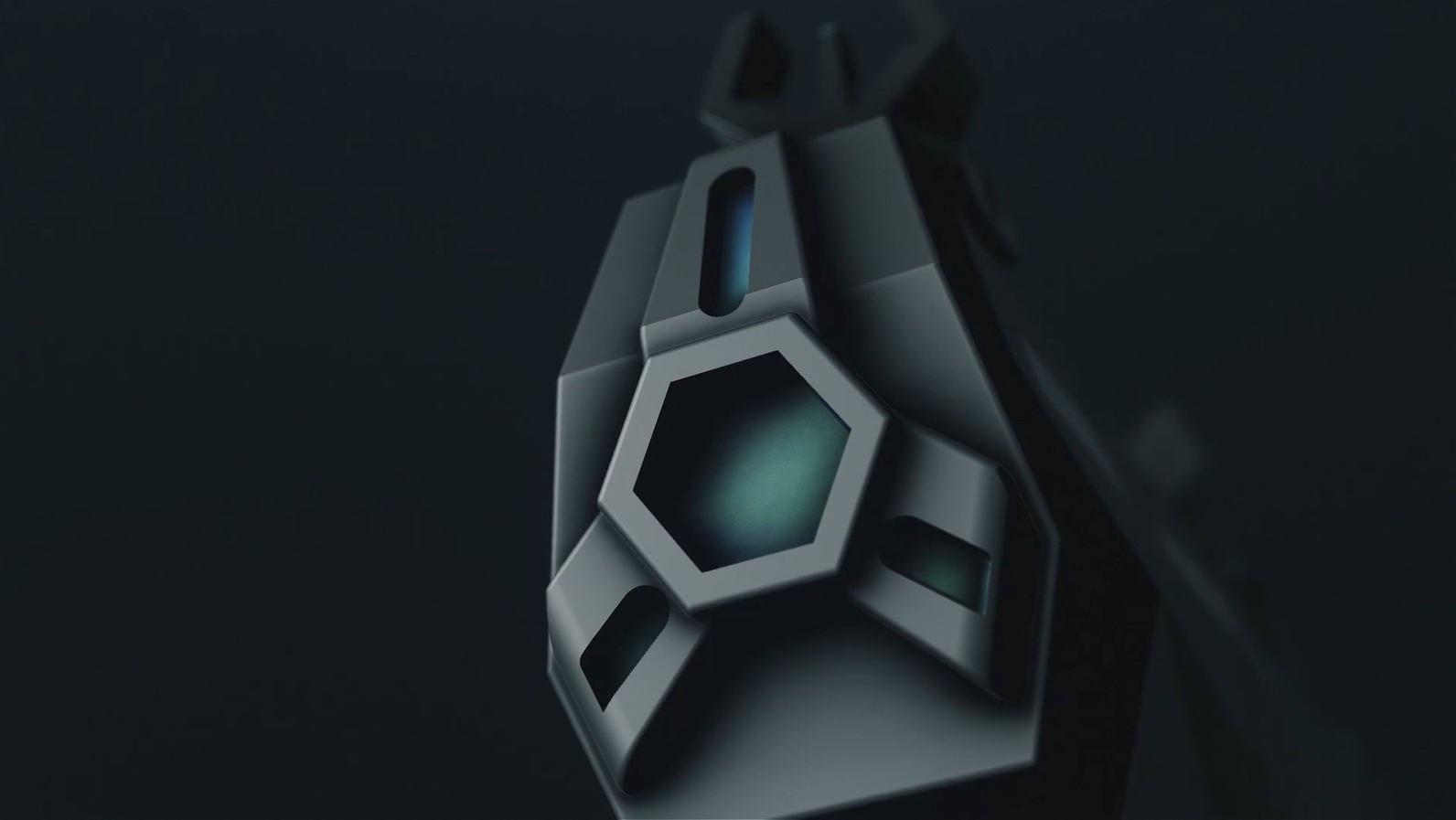 10. Shot brightening
Three light beams of orange light coming out of the muzzle of the tagger are responsible for the illumination of the shot even in the basic configuration. In the arena version, which is available only for the Cybertag equipment, the brightening of the shot matches the color of the player's team. 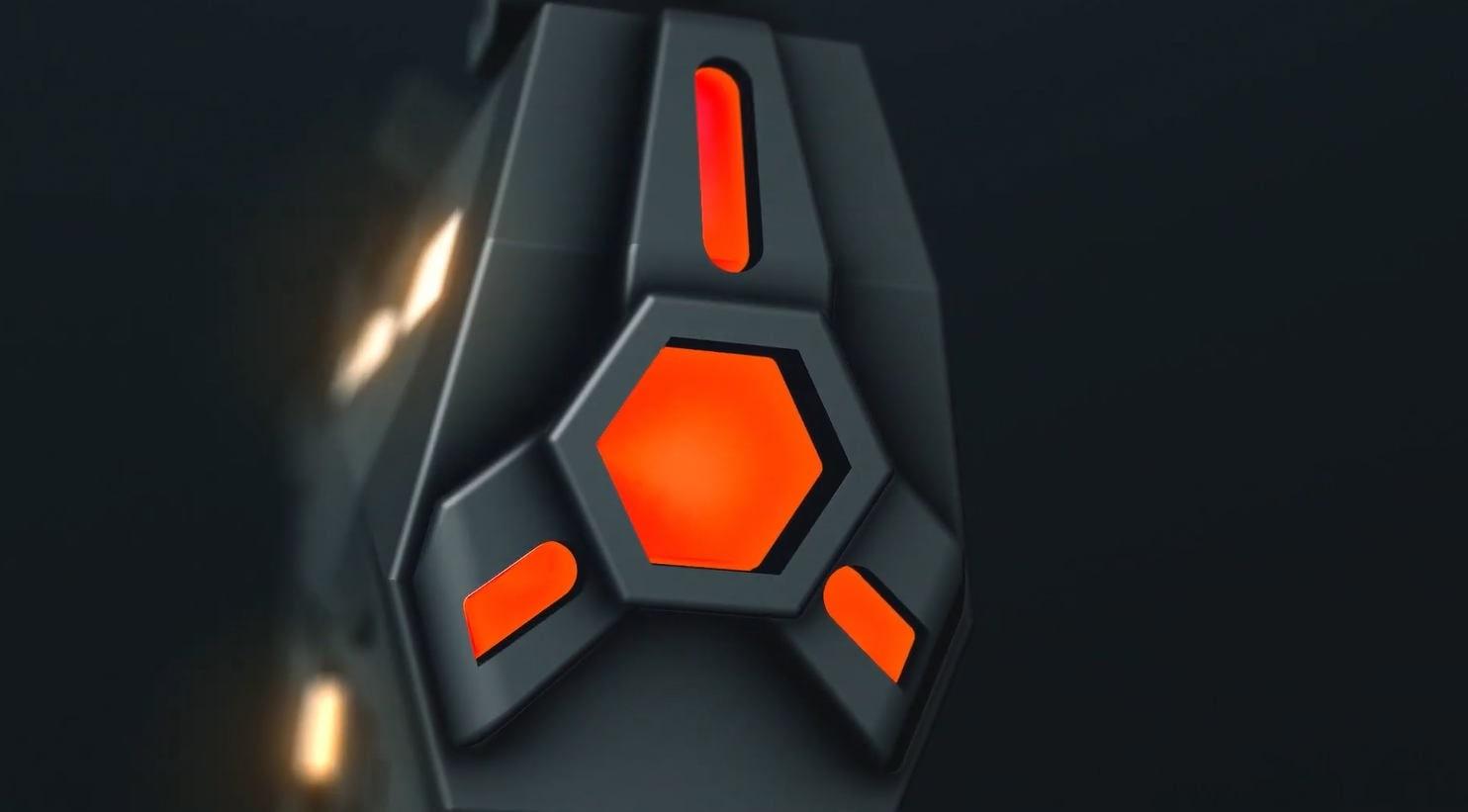 11. Infinite Trigger
Already in the basic version, this tagger comes equipped with a trigger based on a Hall sensor, which provides an unlimited number of clicks, since the trigger no longer use mechanical moving parts. 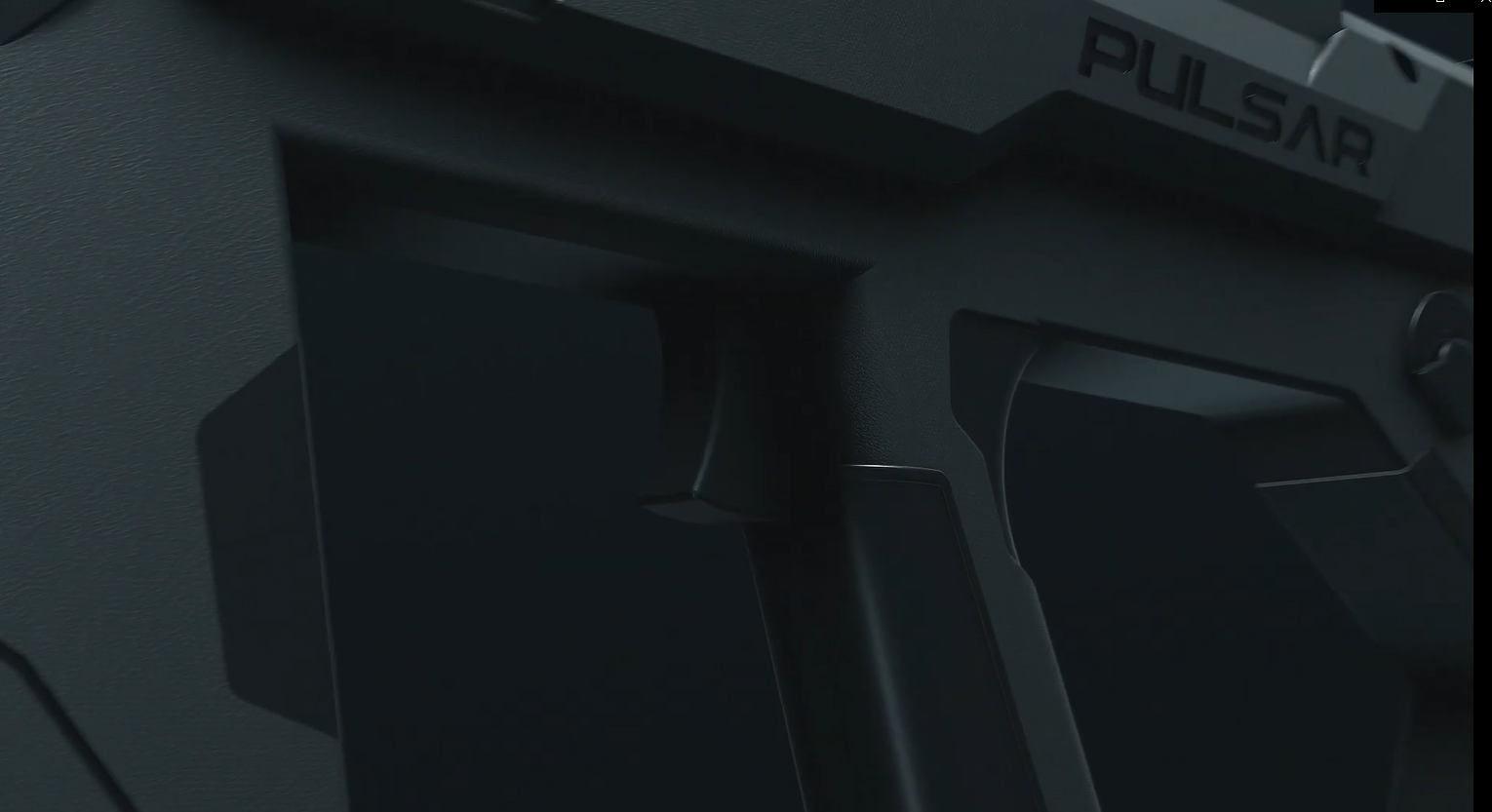 12. New reload button
For the first time, we relocated the weapon reload button, which is now installed on an additional handle at the bottom of the body case for quick reloading.

13. Sound
When developing this laser tag gun, we included an acoustic chamber inside the case, in which a speaker with a diameter of 57 millimeters is installed, so the sound is exceptionally clear and loud.

14. Picatinny rail
The Picatinny rail at the top of the tagger will allow the player to install any additional battle attachments of choice. Therefore, you can equip this tagger with your favorite optic or red-dot sight. 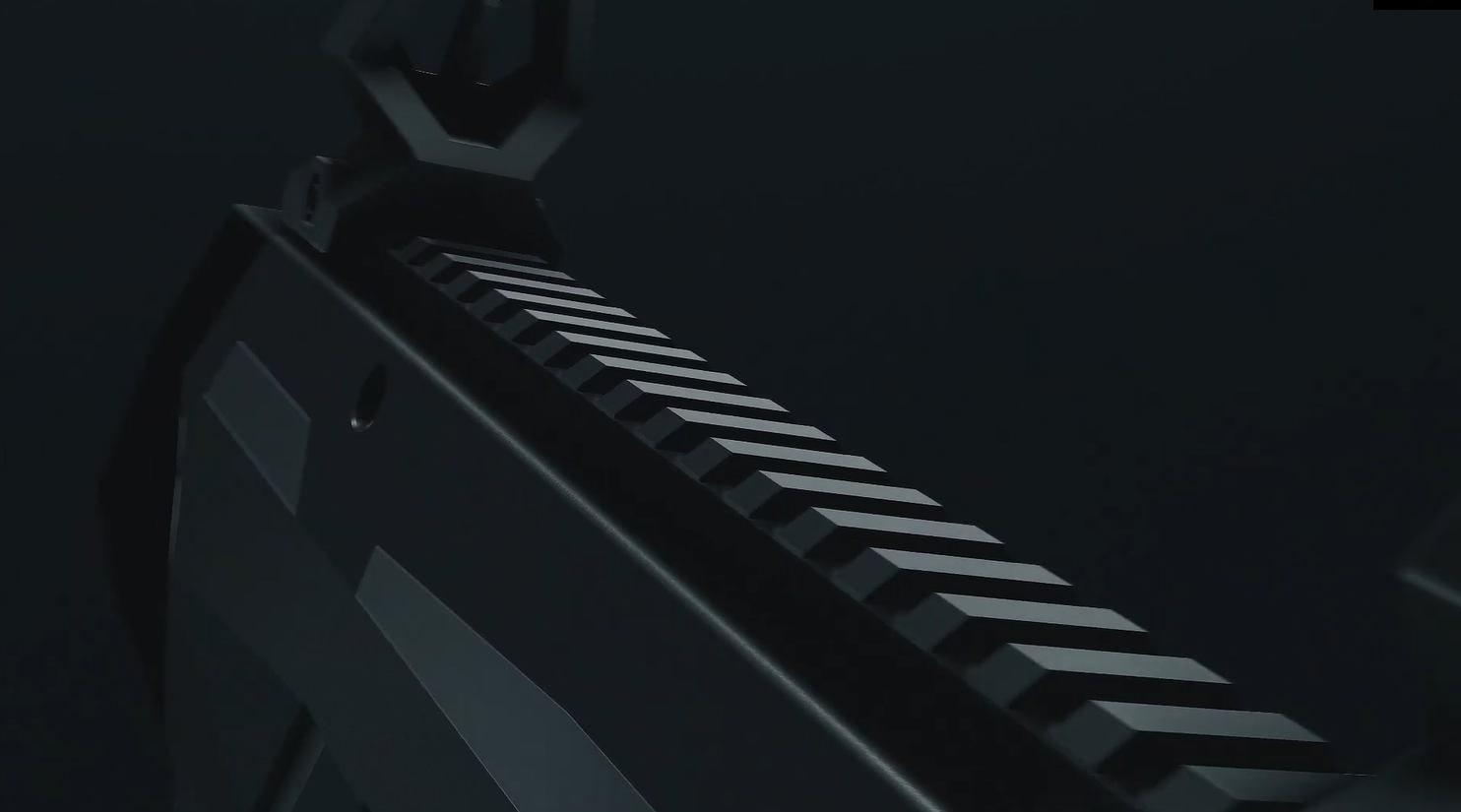 15. Rubber stock
For the first time, we have equipped the tagger with comfortable and soft butt pad made of eco-rubber, so players will not experience any discomfort even during long games for many hours. 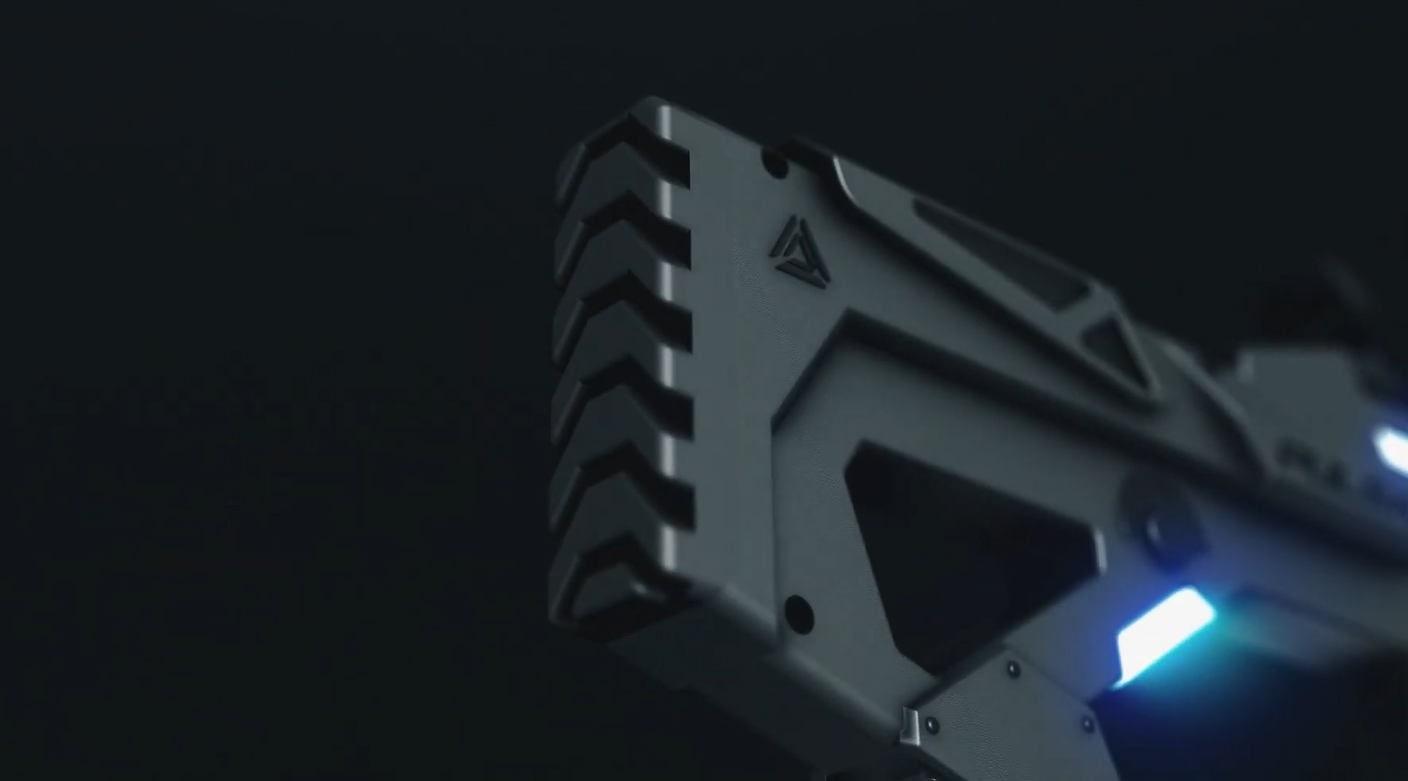 16. Impact resistant plastic
Like most models of our design from the unique series, we used a new generation of shock resistant plastic, which allows us to achieve the solidity of the case on par with military weapons.

17. Coloring the tagger in team color
In the arena version for the Cybertag system, this tagger has special transparent inserts that glow with the color of the team the player is assigned to. In the laser tag version, they were replaced with colored plastic plugs, available in several colors. Therefore, you can assign a permanent color to the taggers. You can also select black plugs if you plan to use these taggers for military-style games and prefer a more brutal look. 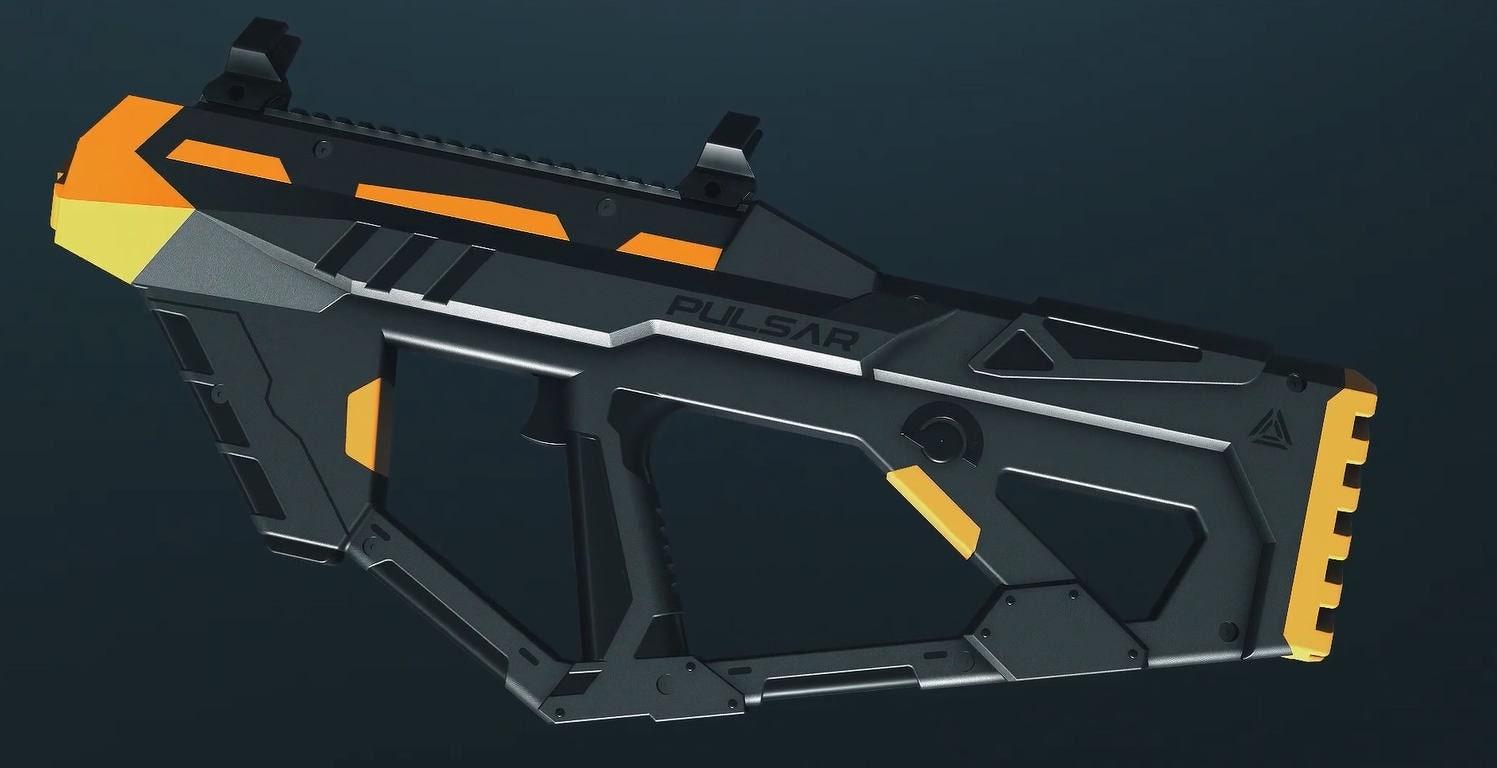 18. Ambidexterity
Placing of the reload button on the lower part of the handle, and the display on the upper part of the case provides a unique opportunity for both left and right-handed players to play with this gun. Therefore, ten percent of left-handers will not feel ‘overboard’ because of the taggers being geared only toward right-handed audience. 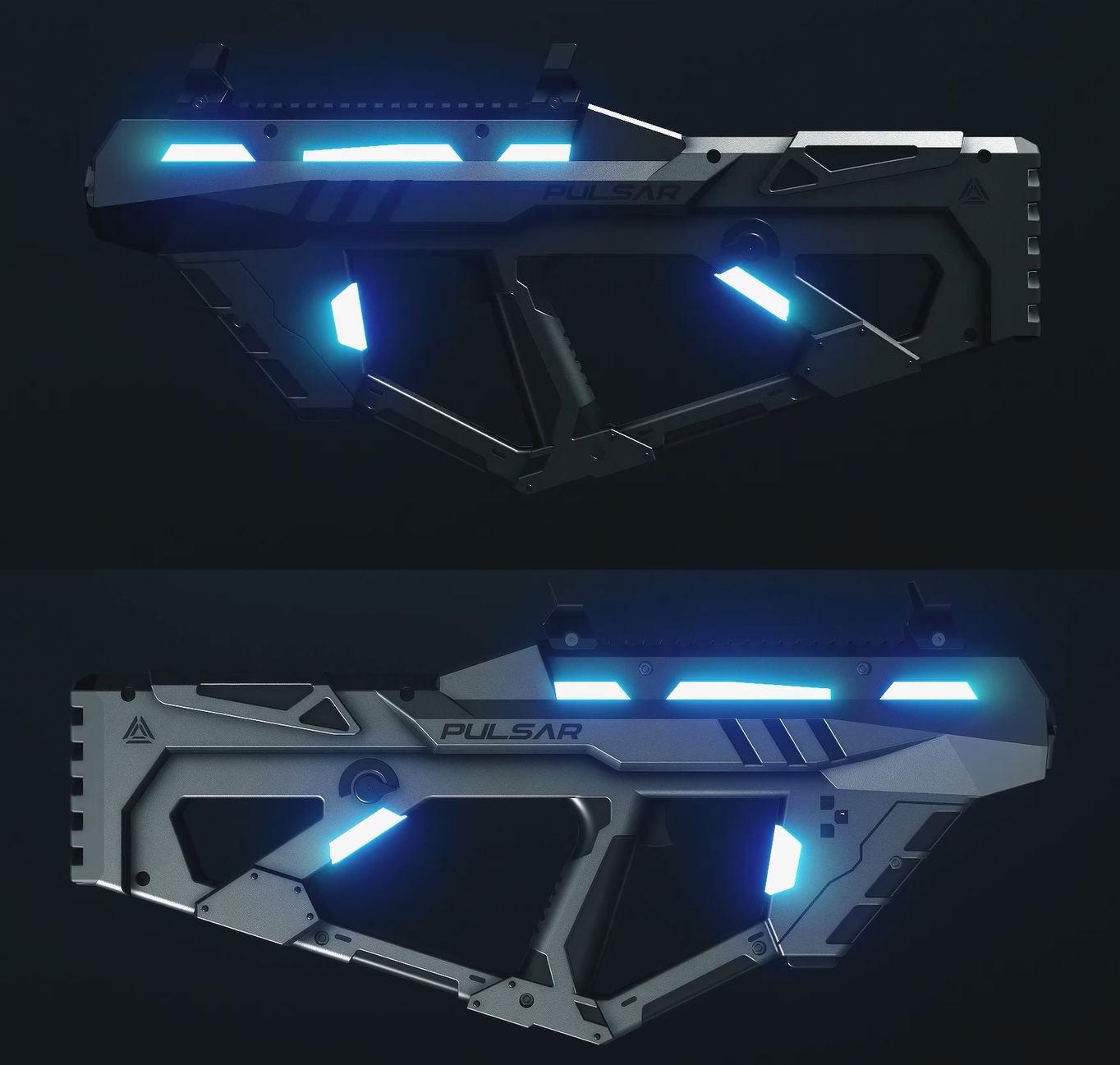