This scenario looks a bit like a simultaneous Assault and Defense for two teams, and it is also very particular about location. You should have two assault objects with an approximately equal level of protection from assault. They should not be so strongly protected as in the Assault scenario, but it is desirable that there are two buildings or two hills or two forest areas, or some combination of these objects. Each object will be an HQ of the team. In the center of each base (it is desirable in some open area), the Domination Point is placed and at a certain distance (necessarily not in the line of sight and, accordingly, not in the line of direct shot), the Respawn Device of this team is placed.

Thus, each team has its headquarters, with the Point in the center and the Respawn at a certain distance from the Point, but not in the line of sight and fire.

2 devices that can work as a domination point, one for each team.

2 respawn devices, one for each team (Simple Medkits or Smart Medkits)

You can use several devices that can act as a Domination Point, these are Digital Flag Devise. Smart Control point and regular Domination point, but we recommend Digital Flag because it has more additional scenarios.

Each team's goal is to capture (paint) the other’s Domination Point and don't let the enemy team capture its own.

The players of each team can respawn an unlimited number of times, but it can be done only with their own team Respawn Device.

This scenario is played for a certain period of time (or until one of the Points get captured), for example, 20,30 or 40 minutes, depending on the level of defensive positions, on the distance between them, on the experience of players and the availability of time. 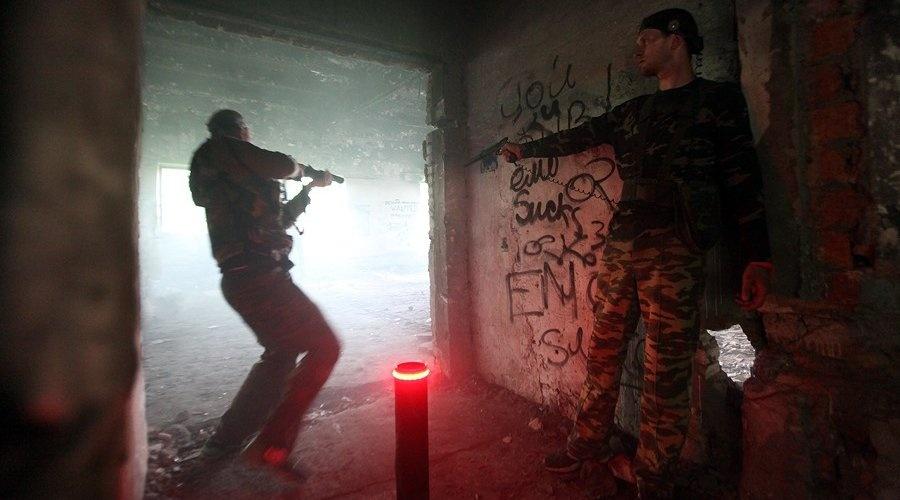 The winner is the team that has first captured the enemy's Point.
If none of the teams have managed to take the enemy's point within the allowed period of time, then the game ends in a tie.

This scenario is usually played if you have a large number of experienced laser tag players who are familiar with a given location. Experienced players are needed because this scenario requires the development of minor tactics (formation and location of defense players, creating usually several battle groups, planning the route to the enemy's headquarters, coordination when capturing the enemy's Point, etc.)

It is necessary to remember that in this scenario, the Respawn Device should be placed at a certain distance, and certainly not in the line of sight or fire from the Domination point, otherwise the defense side gets too much of an advantage (by having the opportunity to endlessly reload and shoot attackng players from the other team while staying next to the Respawn Device) and capturing the opponent point becomes impractical.

There are times when the Points get captured with a small time interval between each other, which is fraught with problems in determining the winning team, disputes and conflicts. Therefore, if the bases are located at a distance when the shout about the capturing may not be heard on the other side of the location, you’ll need to have two judges at the game, or some loud means of communication, such as a whistle.

It is preferred that the Respawn Devices of each team are on the opposite sides from the opponents’ bases and are not in the way of potential attack routes, otherwise it gives too many advantages to the defensive party.