With shipment Delivery method will be selected by customer and approved by manager. for $0
Sales price $118
Price / kg:
LaserWar
Description

An electronic RGB target is an excellent tool for laser tag guns’ firing adjustment. That’s why it is a very popular and must-have device for any laser tag business owner and operator. Just place the target at the desired distance and shoot at the center of the white circle with a cross. A loud piezo signal, as well as four bright RGB-LEDs, will notify you about target hitting.
Unlike the previous models, this new target itself determines the color of the shooting laser tag gun (Tagger), from which it was hit and lights with a corresponding color (red, yellow, green, or blue).
The power button is located on top of the plastic case and the power socket at the side. The power source is a lead-acid battery with 0,8 Ah capacity. Its capacity is enough for quite a long time.
Now this device has a new version and can work in a new laser tag shooting gallery mode.

The new shooting range mode is called "arcade" and is performed in the settings with the letter [A]. In this case, the device works as a digital shooting range and can train not only the accuracy of the players but also their reaction speed and the ability to quickly aim and shoot precisely the target.
The point is that the player is able to hit the target with an accurate shot only at that moment when the light comes on and the target goes into an active state, which lasts for a very limited time. The moment of target activation is randomly selected in the interval specified in the device settings. When the player hits the target, it is highlighted for 1 second by the color of the player’s team makes a sound signal and shows the number of damage points.
Such a target operation mode allows running tournaments between players and even teams when players of different teams compete in accuracy and shooting speed by simultaneous firing at randomly flashing targets. Hitting several randomly activated targets will be a difficult task even for an experienced shooter.
If laser tag business owner and operator has are several targets, he can run practical shooting competitions by placing the targets at different distances from the shooter and assigning them different score points depending on the complexity of the target hit 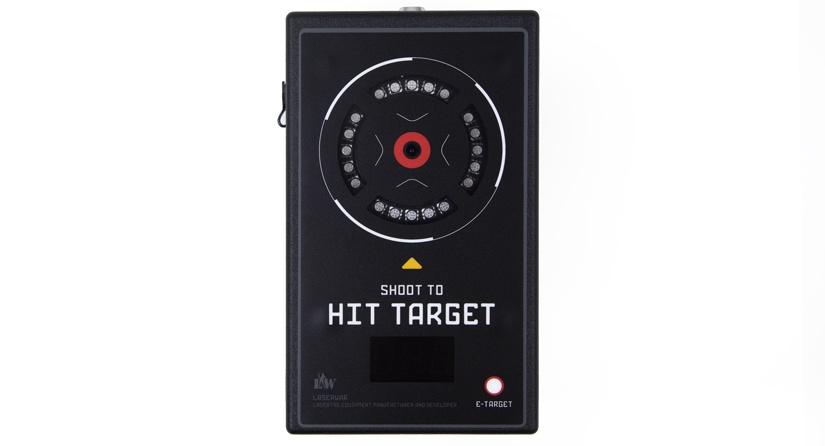 The design of the new target has been changed and now it has a prominent area of the shot. A power socket is located on the side and switching on/off lock is located on the top cover. Inside it uses a 2.2 Ah lithium battery that guarantees 15 hours of operation time. Device weights 32 oz (900 g). 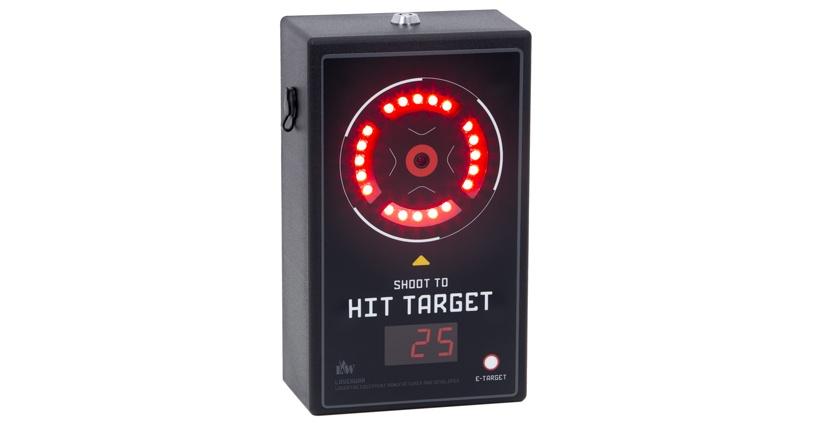 Using the Universal remote control or the smart Nano remote control, the manager can change the sound level, brightness and flashing type. So standard laser tag command are used for changing Target settings.
- The "New Game" command resets the hit counter,
- "Kill Player" command switches the target to admin mode.
If the device is already in admin mode
- use “Kill the player” command to switch to the next parameter,
- use “New Game” command to change selected parameter,
During the setup process, the device ignores all hits from laser tag guns, and it indicates the value of the selected parameter at the bottom of the screen.

The game manager can set the following player parameters to be shown by the target while being fired.

Switching to normal mode goes automatically 3 seconds after the user has stopped changing settings
If the target was not hit or parameters were not changed for 5 minutes, it will turn off. The player can turn it on either by turning the key or by a shot.